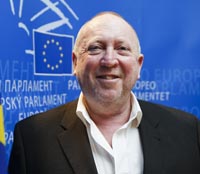 Keith Taylor, Green MEP for the South East of England, has called for protection for LGBT people against violence and civil partnerships for straight couples as Europe celebrates today,  the International Day Against Homophobia, Biphobia and Transphobia (IDAHOBIT).

IDAHOBIT, marks 23 years since the World Health Organisation removed homosexuality from its list of mental disorders. LGBT rights have come a long way in the past few decades, with homosexuality legal in all European Union (EU) states.

However, there is still a long way to go as discrimination in daily life and law continues within the European Union and across the globe.

EU Agency for Fundamental Rights (FRA) has today published a report detailing the results of a survey covering the EU and Croatia, with over 93,000 respondents, to discover the everyday issues affecting LGBT people. This survey, which is the most extensive of its kind to date, collected comparable data on LGBT people’s experiences of hate crime and discrimination, as well as their level of awareness about their rights.

The survey’s main findings include:

•  one in four (26%) respondents were attacked or threatened with violence because of who they were, including a whopping one in three (35%) victims among transgender people.

•  only one in ten (10%) respondents reported discrimination to the police, and only one in five (22%) reported violence or harassment.

“Today is International Day Against Homophobia, and the release of the EU survey gives us a chance to review progress in tackling gender and sexual identity discrimination and recognise there is still much work to do in delivering equality.

“We must stand in solidarity with the struggles of all LGBT people winning fights for equality across the world whilst not forgetting the continued discrimination and prejudice faced by many.

“The figures show that homophobic and transphobic violence is still at shocking levels. There is no excuse for members of our communities living in fear because of their sexuality or gender orientation. Governments across the EU, including our own in Britain, must take these findings seriously and ensure that LGBT people are given the full protection of the law.

“As part of the European Parliament’s LGBT Rights Intergroup i’ll be continuing to work for a world free of homophobic prejudice. Nobody should be discriminated against because of who they fall in love with.”

Mr Taylor is also calling for civil partnerships to be opened up to straight couples.

“In the UK it looks like we are finally going to see legislation which will allow gay people to marry. For full equality we must also see civil partnerships opened up to straight couples.”

“The data shows that one in four (26%) respondents were attacked or threatened with violence because of who they were, including one in three (35%) victims among transgender people. It’s high time the European Commission and Member States stop paying lip service to LGBT rights and turn words into action: they must condemn hate speech and ensure safety and respect for all EU citizens.”