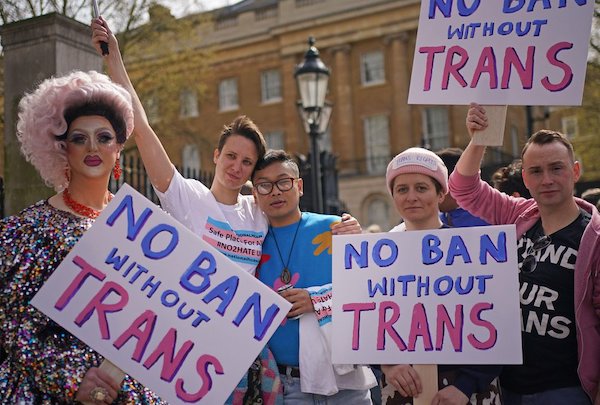 Culture Secretary Michelle Donelan said in a written statement that the Bill “will protect everyone, including those targeted on the basis of their sexuality, or being transgender”.

Ms Donelan said it is a “complex” area and legislation must not “harm the growing number of children and young adults experiencing gender-related distress, through inadvertently criminalising or chilling legitimate conversations parents or clinicians may have with their children”.

“We recognise the strength of feeling on the issue of harmful conversion practices and remain committed to protecting people from these practices and making sure they can live their lives free from the threat of harm or abuse,” she added.

A statement released today by the UK government, sets out its intention to publish a Conversion Practices Bill.

“We will be publishing a draft bill to ban conversion practices, protecting everyone.

“The Bill will go through pre legislative scrutiny in this parliamentary session. We hope to send it to a Joint Committee for scrutiny and will work with the Liaison Committee accordingly.

“There are clearly issues that are not fully resolved. We are determined that legislation will not cause harm to children and young adults experiencing gender related distress by inadvertently impacting on legitimate conversations parents or clinicians may have with their children.

“Pre legislative scrutiny exists to prevent this, and other unintended consequences, by utilising stakeholder expertise and input from parliamentarians.”

It is not known exactly how widespread the practice is but 5% of 108,000 people who responded to a UK-wide LGBTQ+ survey in 2018 said they had been offered some form of conversion therapy, while 2% had undergone it.