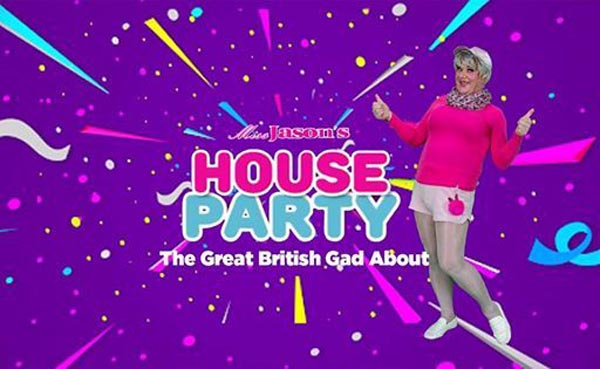 As the nights draw in, what better diversion than an hour of tv silliness, made right here in central Brighton?

Recorded before a live audience in Brighton, the show’s format is deceptively simple. The panelists watch filmed footage of Miss J out and about in a town, and through clues in the film’s interviews with locals, and some less than incisive questions by the panel, they have to guess the location.

What that doesn’t take into account is the hilarious cavorting of the host on film, with plenty of innuendoes for this in the know. And then there’s the chemistry with the panel – the love/hate bitchiness with Davina, the knock about humour with Nicki, who was having trouble keeping her cleavage inside while in the studio, the cute androgyny of Adam and the dry urbane posh humour of Mr Stacey, well-known for TV shows like Bargain Hunt and Flog It .

All five performers are good at one-liners – Miss Sparkle watched a clue and then said “Well that’s thrown me” to which Miss J replies: “I should like to see the person who could.”

So to the clues: the place is not in East Sussex; it’s near water but not on the coast; it was famous for milling many hundreds of years ago and it’s not near a motorway – or not one that Miss Jason can remember !

The whole evening is complete madness and the audience in the studio really enter into the spirit of the occasion – probably helped by the fact that recording is in 11 minute segments with plenty of drink ordering time in between.

And what was the secret location? My lips are sealed. Tune in to find out

The programme is broadcast at 9pm on Latest TV ( freebies channel 7 , Virgin media 159 and on-line at the latest.co.uk on Thursday, October 25