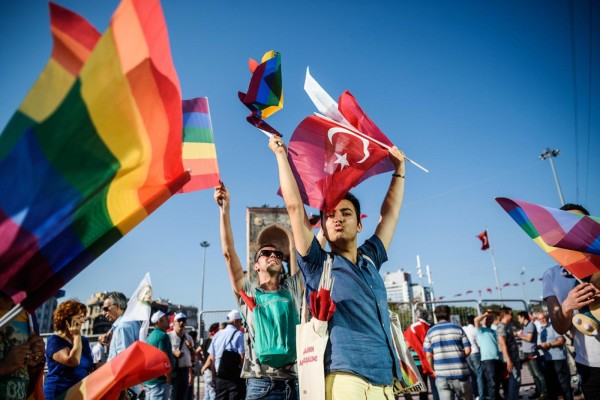 Four students in Turkey have been arrested for creating artwork which depicted rainbow symbols alongside a sacred Islamic site and displaying it at a protest. According to the BBC, students at Boğaziçi University in Istanbul were protesting the government election of Professor Melih Bulu as a senior university official. The students argued it contradicted the university’s 158-year-long history of electing its own rectors.

Amid the protests, four students laid down a piece of artwork at the university which showed the Kaaba (the most sacred site in Islam) alongside LGBTQ+ rainbows. The Istanbul governor’s office said the artwork was an “ugly attack” that “mocked religious beliefs”. Süleyman Soylu, Turkey’s interior minister, called the students ‘deviants’ in a tweet which reads: “Four LGBT deviants, who disrespected the Islamic holy site, the Kaaba, have been detained at Boğaziçi University.”

The university’s LGBTQ+ society, Boğaziçi LGBTİ+, called for the release of the students, saying: “We stand with our detained friends against those who attack LGBT+ people. We do not accept trustees who target their own students.” The arrest of the students follows several years of increasing hostility towards Turkey’s LGBTQ+ community, with Istanbul Pride having been banned five years in a row. Although same-sex relations are legal, LGBTQ+ people have reported facing widespread discrimination, harassment and violence.