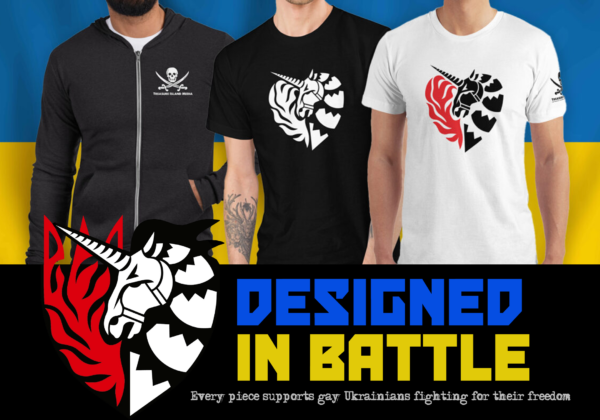 Treasure Island Media has just launched a new line of merchandise – Designed In Battle – to support of gay soldiers fighting in Ukraine, with 100% of profits going directly to the front line.

Gay Ukrainian soldiers wear a secret symbol into battle to help identify themselves to each other – and now they’re sharing their secret with gay men around the world.

The Achilles Brotherhood is a group of man-loving Ukrainian troops currently fighting on the front line of the ongoing Russian invasion.

To support these heroes, Treasure Island Media has now launched a range of limited edition gear, designed in battle and featuring the Brotherhood’s special symbol.

100% of the profits from the sales of these items will be donated to the gay military group, and will be used to purchase medical supplies for the troops and other equipment such as replacement clothing and boots.

A spokesperson for Treasure Island Media said: “These brave gay men are not just battling for the freedom of their country. They’re also in a fight to the death against a homophobic regime for the right to live freely as men who love men.

“On that front, they fight for all of us – and they need our support. By wearing this gear, you can support these gay heroes and help make a difference to their fight for survival.”

The charity merchandise can be found HERE

Earlier this year, we reported on the plight of gay Ukrainian soldiers like Viktor Pylypenko.

The 35-year-old soldier told of the additional threat he faces from Russian forces due to his position as a gay rights activist. US officials had warned that Russia has compiled a ‘hit list’ of people like Viktor they want captured or killed.

“I am an LGBT activist in the military,” Viktor said. “They can arrest my parents, torture them or kill them. So I am really afraid for my parents and I am trying to convince them they should leave but they don’t want to.

“I’m afraid of captivity. If they capture me, I will be tortured and killed in a very brutal manner… there will be no mercy. I think I would rather kill myself than give myself into captivity.”