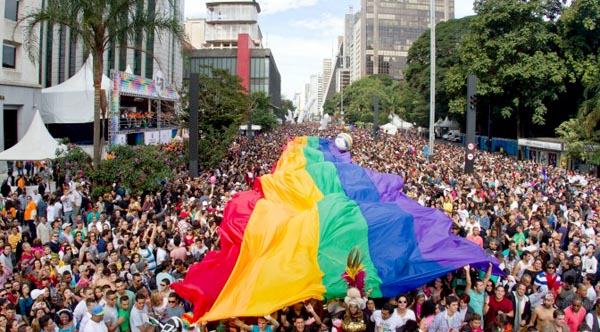 Despite all the progress towards equality over the last few decades – we still face daily discrimination and prejudice – to combat this we have the tradition of Pride a mixture of protest, awareness and celebration.

I had the opportunity to see the 21st Sao Paulo Pride quite unexpectedly on Sunday, July 18, while I was visiting my partner in Sao Paulo. The Sao Paulo Pride parade is recognised as being the largest in the world.

Unlike Brighton Pride with its defined routes, organised park and street events, inclusive mixture in the Parade of large businesses and community groups and attendees of 300,000 or so  – Sao Paulo was so very different.

It was held in the main street of Sao Paulo (Avienda Paulista – which resembles a motorway) and featured just 15 floats, from large organisations and clubs with no room for walking groups or community organisations.

All the floats were huge custom-built trailers with the sole purpose of carrying the biggest and loudest sound systems they could, carrying the largest boom boxes you could imaging to entertain the 3,000,000 (yes million!) who watch the parade pass by. The music they produced was so loud my ears were still ringing one week later.

The entire eight lanes of Avienda Paulista were crammed shoulder to shoulder with revellers, from 10am and the parade only moved when it felt like it. As I was leaving the metro stations were rammed with thousands more arriving at 5pm in the evening.

Fortunately it was mid winter in Brazil so the temperature was a comfortable 20 degrees centigrade – the prime spot to be dancing was over the air vents from the metro.

However, despite the air of fiesta there was a nervous undercurrent, as in the past the parade had been rocked by bombs. Thankfully this year, Sao Paulo Pride was incident free.

The parade took about 5 hours to complete the route, progressing like a train of very loud and colourful snails with a parallel stream of people dressed in colourful and outrageous costumes, walking and dancing besides it.

It finished in a local square where a top Brazilian DJ (their equivalent of Fatboy Slim) banged out current tunes till the early hours of the morning. However, most partygoers decamped to little squares and parks all over the city until 4am in the morning, when everyone was moved on by the police.

The focus of this year’s parade was the fight for a secular state (estado laico.)  The separation of church and state is particularly relevant at a time when right-wing religious leaders are rising to power at all levels in Brazilian politics.

The gay scene in Brazil is different to Brighton  – the main gay male image in Brazil is all about being a top, macho, muscle Mary, and the young Brazilian men furiously vied to out-macho each other.

Speaking to a few local people, in very bad Portuguese, they said they faced the same huge pressures to conform to social norms that we all do; but compounded by religious prejudice and with the added pressure to be bigger and more macho than the next person (sounds wonderful I hear you exclaim!).

Macho men were not alone on the parade – there were all variations of the LGBT+ Spectrum, along with every type of costume and group imaginable, from carnival costumes, drag, lots of swimming trunks and feather boas and balloons being quite the feature.

Oddly, although Brazil is a place where friends hold hands with each other, being too close and intimate or ‘obviously’ LGBT+ is noted and frowned upon (it’s quite a hard balancing act to present your acceptable side), so in reality, there are times when England remains more open and accepting to LGBT+ folk than the more glamorous South American destinations we all dream about visiting.