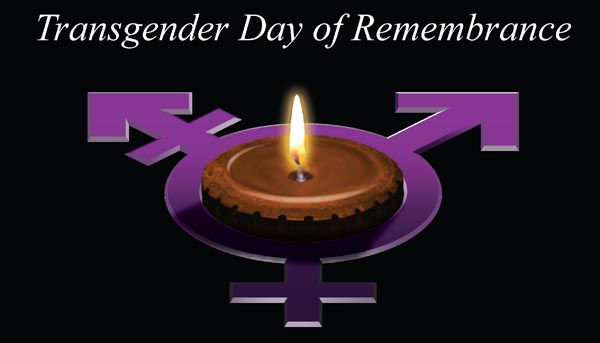 Today is the 16th International Transgender Day of Remembrance (TDOR).

TDOR IS HELD every year on November 20 to remember and honour those who have been killed due to transphobic violence and discrimination across the globe.

The event is held in November to honor Rita Hester, whose murder on November 28, 1998 was the catalyst for the creation of the ‘Remembering Our Dead’ web project and a San Francisco candlelight vigil in 1999. Rita Hester’s murder — like most anti-transgender murder cases — has yet to be solved.

Although not every person represented during TDOR self-identifies as transgender — that is, as a transsexual, crossdresser, or otherwise gender-variant — each is a victim of violence based on bias against transgender people.

Over the last decade, more than one person per month has died due to transgender-based hate or prejudice, regardless of any other factors in their lives. This trend shows no sign of abating.

TDOR publicly mourns and honours the lives of brothers, sisters, friends and colleagues who might otherwise be forgotten.

The vigil helps everyone express love and respect for trans people in the face of national indifference and hatred.

The Day of Remembrance reminds non-transgender people that trans people are their sons, daughters, parents, friends and lovers and gives allies of the trans community a chance to remember those lives lost and memorialise those who’ve died from anti-transgender violence.

Dr Greg Ussher, METRO Chief Executive said: “All METRO staff and volunteers will be taking time today to remember all those we have lost to transphobic violence and discrimination. We know that over the last year at least 226 trans people have been killed and we remember also those who have taken their own lives.

“Our Youth Chances research evidence shows that overwhelmingly trans young people face the most discrimination, disadvantage, abuse and violence. We are currently further analysing our data on trans young people’s experiences and we are pleased to have nearly 1000 responses from trans young people.  We can see that across the board; at school, in their health and wellbeing and their safety the consistent pattern is that trans young people are faring worse.  We know that 44% of LGBTQ young people have thought about suicide but this rises considerably for trans respondents.

“Gender diversity is a real and great challenge for society which would should celebrate.   Protection in the law is increasing for trans people albeit that there is still a long way to go, but understanding, awareness and attitudes need to catch up more quickly to save lives, stop the violence and embrace gender diversity.”

TDOR will be remembered in Brighton & Hove with an event at the Dorset Gardens Methodist Church, Dorset Gardens, Kemptown on Sunday, November 23, at 3pm. Arrive at 2.45pm or a little earlier so the proceedings can start promptly.

The vigil will include speakers from the community and singing by the Rainbow Chorus. Attendees will be asked to ‘build’ the wall of remembrance by placing the names of the dead on the wall.

The vigil will also include a minute’s applause to acknowledge those who have died. Refreshments will be available immediately afterwards at the venue followed by a relaxed social at the nearby Marlborough pub.

To view the Remembering our Dead Web Project, click here:

For more information about Transgender Day of Remembrance, click here: