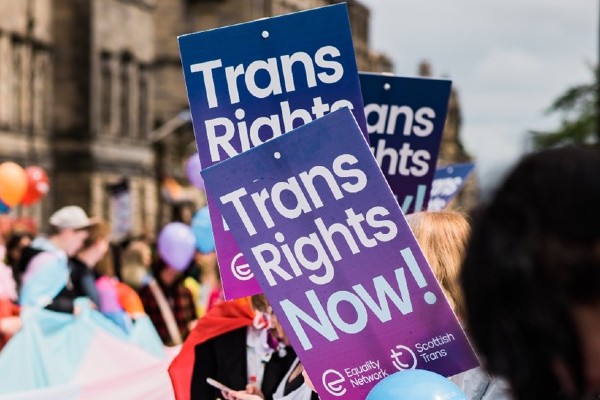 Scottish Trans, the trans equality project of LGBTI equality and human rights charity the Equality Network, has condemned the UK Government’s announcement that they will seek to block the Gender Recognition Reform (Scotland) Bill.

All the parties in the Scottish Parliament except the Conservatives committed to improve gender recognition law in their 2016 and 2021 Holyrood manifestos. The Scottish Government consulted publicly on the proposals in 2017, then published the Bill and consulted again in 2019.

The Parliament’s Equalities, Human Rights and Civil Justice Committee consulted again in the spring and summer of 2022, and heard oral evidence on the bill from 39 witnesses. Those included supporters and opponents of the legislation, and experts in matters raised about it, such as equality law, women’s services, young people, sport and prisons, and religious representatives. They also heard from the leader of the Irish Seanad, about experience with similar legislation passed there some years ago.

The Committee recommended that the Parliament approve the principles of the Bill.  Over 300 amendments were then considered at stages 2 and 3 of the bill, and more than 80 of them, from MSPs of different parties, were agreed upon to address matters that had been raised in relation to the Bill.

Vic Valentine, Manager of Scottish Trans, said: “The Bill as passed would introduce a simpler and fairer way for trans men and women to be legally recognised as who they truly are, allowing them to live with the dignity we all deserve.

“It was passed by the Scottish Parliament by 86 votes to 39, with the overwhelming support of the SNP, Labour, the Greens and the LibDems. That followed years of consultation, and lengthy Parliamentary consideration and debate. The Bill covers matters that are devolved to the Scottish Parliament, and its consequences were considered by MSPs in great detail.

“For the UK Government to seek to block the Scottish democratic process in this way, simply because they disagree with the welcome decision the Scottish Parliament has made to improve trans people’s lives, is unacceptable. We fully expect the Scottish Government to challenge this in the courts.”