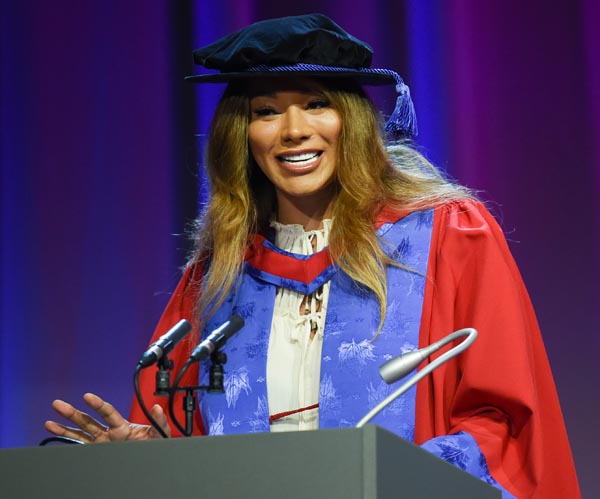 MUNROE, who regularly appears on TV to comment on race, diversity, gender and LGBT+ issues, was battling severe depression, an eating disorder and had “so much sadness, anger and confusion inside of me” until she received an email from Dr Jessica Moriarty, Principal Lecturer in the University’s School of Humanities.

Munroe, who was studying English Language and Media at the time, was speaking after being made an Honorary Doctor of Letters at the University’s graduation ceremonies at the Brighton Centre today (July 30).

“I stepped into Jess’s office and I could see her face drop. I was painfully thin. I can’t even begin to describe how lost I was at that point. How desperate I was to put into words what was going on inside me to help it make sense.

“From that point on, Jess helped me to start helping myself. She encouraged me to own the hurt I was feeling and put it into my work.

“She helped me to develop the skills that I now use every day within my activism, my writing and beyond. She helped me to communicate how I have felt, how I feel and allowed me to connect with how others may be feeling.

“So I would like to dedicate this doctorate to Jess, for being the most incredible role model I could ever wished for (she’s probably crying now and I’m definitely going to cry soon) and giving me your time and understanding in some seriously dark times.”

Munroe, who received her award for her major contributions to transgender issues, was assigned as male when born but, was never comfortable with her gender and described her adolescence as challenging. She came to the University and after graduating in 2008 pursued a career in fashion and modelling, using this as a platform to speak out on a range of issues.

Munroe has spoken at Oxford, Cambridge and Princeton universities and writes for publications including the Evening Standard and The Guardian. She was named Cosmopolitan’s Changemaker of the Year in 2018.

She told graduates: “As you go out into the world be ambitious, yes, but also be kind, be understanding, be patient. Because every single one of us are going through or will go through something where we need someone to believe in us when we don’t believe in ourselves.

“Be that person to help someone else fly when their wings feel heavy.”