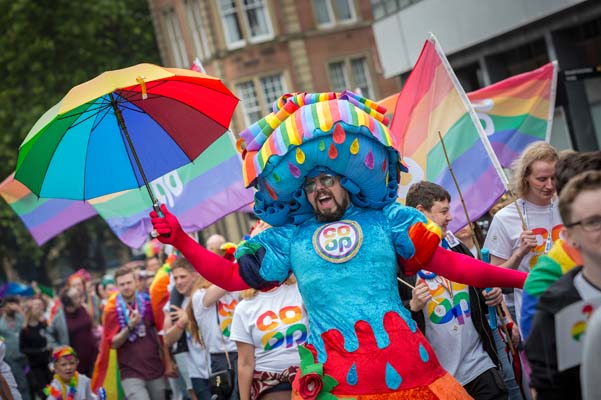 Wet weather fails to dampen the spirits of revellers at Newcastle Pride on the weekend of July 21-23, as thousands flocked to see top pop acts.

Newcastle Pride 2017, saw record numbers march in their tenth annual Pride parade through the city and tens of thousands more braving the rain for the free entertainment at the Town Moor.

Festival organisers say that in the tens years that Newcastle Pride has been running, it has engaged more than half a million people.

Chart-topping boyband A1 and X Factor winner, Sam Bailey headlined the annual event – which drew crowds of 73,000 across the weekend. They were supported by Stooshe, Kelly Llorenna, Livin’ Joy and 80s diva Angie Brown.

The weekend started on Friday evening (July 21) with the Newcastle Front Runners, LGBT+ 5K run on the Town Moor followed by entertainment in the Powerhouse Dance Tent.

On Saturday afternoon, a record-breaking 16,000 people brought the city centre to a standstill as they took part in the annual parade through the city and up to the Moor – with their arrival launching the official start of the music and entertainment at the site.

As well as a feast of live music over the two days, visitors were able to enjoy a host of additional activities and themed entertainment zones, including the Eazy Street Cabaret Tent, the Tesco Bank Family Zone and the Steve Paske Heath Zone, sponsored by Arnold Clarke and Northumbria Water, which ran alongside a fun fair and number of market stalls in the Matfen Hall Rainbow Village.

The weekend ended with a candlelit vigil at the Civic Centre on Sunday night (July 23) – offering visitors a chance to reflect on the fight for equality and the ongoing LGBT+ struggle for some worldwide.

Mark Nichols, Chair of Northern Pride, which organises the annual event, said: “This year’s Pride parade was without a doubt our biggest parade to date. With more than 16,000 marching through the city, and more joining along the way, we have beaten last year’s record of 12,500.

“Plus, for every one person in the parade, five people stood cheering them on.

“And despite the weather, it was fantastic to match last year’s figures, with 73,000 people of all ages flocking to the Town Moor to celebrate the LGBT community and enjoy a host of amazing music, great food and top entertainment across the weekend.”

Sean Bullick, Chief Executive for sponsors NE1, said: “We’re delighted to have supported one of Newcastle’s largest and most popular events once again this year.

“Not only does Newcastle Pride bring thousands of tourists to the city and boost the local economy by millions, but it also celebrates the diverse community we have here in Newcastle and it continues to grow each year, a fact underlined by the 28% increase in those who joined the parade this year – and we’re proud to be a part of that.”

Newcastle Pride is now officially recognised as one of the largest free, LGBT+ events in the UK, attracting more than 73,000 visitors and contributing more than £10.4m to the economy in 2016.

Figures are currently being calculated on this year’s economic impact, however in the past three years (2013-2016) Newcastle Pride has boosted the city’s economy by £28million and has generated 20,000 hotel rooms across Newcastle.