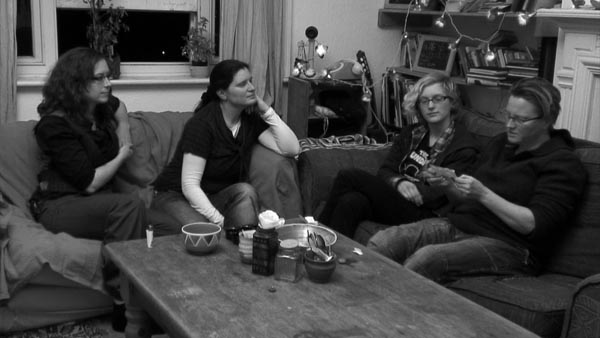 The Symposium is an LGBT discussion series being made for the web and Latest TV, which asks groups of people to discuss questions and topics on camera that affect LGBT lives.  Filmed in an informal setting – such as around a kitchen table – a group of four chatty, opinionated and socially aware people pick questions randomly from a hat and are given free rein to consider, debate, argue and discuss their responses.  Questions cover a wide range of issues such as Pride, pornography, relationship roles, gender, political activism and growing old.

The Symposium was created out of a genuine interest to highlight and explore views and opinions of LGBT people on topics outside of, and beyond the regularly debated issues on TV.  James Marcus Tucker was inspired to make the series when watching a 1960’s black and white documentary called Love Meetings by Italian filmmaker Pier Paolo Pasolini, in which he asked members of the public to express their opinions on a range of topics relevant to Italian society at the time.  The film is a fascinating and educational look into world views from a particular context. The aim is for The Symposium to become a time-capsule for LGBT lives in 2013.

James is looking for people from all walks of life who wish to be involved.  Whatever your background or beliefs, The Symposium aims to give voice to people who wish to have their say and enjoy a good debate.  The variety and diversity of world views within the LGBT community is something which needs to be represented.  James particularly wants to capture groups with good chemistry on camera and groups (groups of friends, sets of couples, families etc) to apply together, or for individuals or couples to apply who wish to be paired up with other people.  Filming takes roughly 3 hours – in that time James aims to film a few discussions covering a number of topics, with short breaks in between.