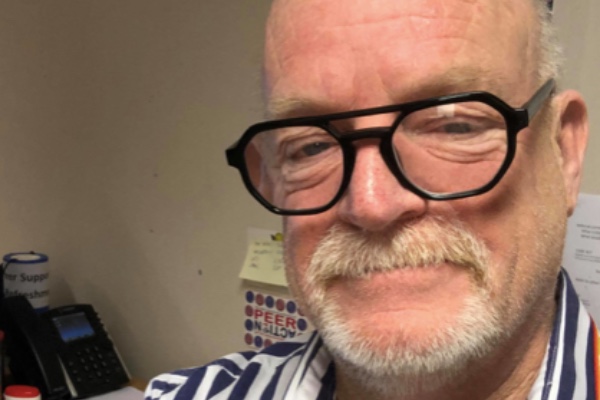 Alan Spink works with a number of local HIV agencies across Brighton & Hove and further afield across the south east, supporting those living and often isolated with HIV. He trained as an HIV peer mentor with the Sussex Beacon and now works with it as an HIV caseworker funded by the Big Lottery Fund. He is 63 and has been living with HIV for 17 years. I asked him to map out what he considers to be the challenges facing those ageing with HIV, both in terms of those he works with and in his own circumstances. Alan is also the brains and creative behind the local anti-stigma campaign featuring Stigmasaur with the Martin Fisher Foundation.

Can you map out the challenges faced by those living and ageing with HIV?

‘In general terms there’s a marked different between what are known as ‘long-term survivors’ and those diagnosed after the advent of commonly used anti-retrovirals in 1996, so I would say for those diagnosed post 1998/99 their lives are, in most cases, likely to be more straightforward. For the longer-term survivors, their bodies are crumbling. They suffer with osteoporosis, some with crumbling spines, have hips replaced sometimes twice and many are in constant pain.

‘Then there are the mental health issues. Many have experienced rejection on multiple levels, often as a direct result of being HIV+, many rely on benefits and it’s an indescribable struggle to survive on the state. The boundaries for disability benefits shift every few years and our clients find that everything has to be reassessed again. It’s the simple things. An individual may qualify for a disability bus pass and then five years later have to re-prove they qualify again.

‘A lot of these people are surviving on charity. In Brighton & Hove we’re fortunate because of all the different charities involved that we have, the most in such a concentrated area in the country, and it’s still difficult here. It isn’t like this all across Sussex. For example, Hastings, the HIV clinic is great, very supportive, but that is all they have. You don’t imagine that poverty of resource in somewhere as wealthy as Sussex.

‘Many of those relying on such services live in poor quality social housing. HIV+ ageing people are low on the council’s priorities, access to GPs is difficult and with appointment ‘rules’ such as you can only talk about one thing at an appointment – these patients have multiple health complaints. In some parts of the country there isn’t a local HIV clinic in the way that we have them, all of their services are through the GP and GPs are stretched.

‘The Lawson Unit [local HIV clinic as part of the Royal Sussex Country Hospital] is quite remarkable. If it’s concerned about a patient it will work with charities and other agencies to support the individual. It’s incredible.’

And your own challenges in ageing with HIV?

‘I’m fortunate in that I was diagnosed in 2003. My viral load rocketed immediately and therefore I was on a drug trial within months and this has probably saved me from physical issues as I grow older.

In 2017 THT reported that 60% of those ageing with HIV were either at or below the poverty line – why would that be?

‘In London and Brighton it’s expensive to live anyway. If you’re accessing the benefits I’ve described then it’s next to impossible. Many long-term survivors have poor financial management skills – unpaid bills and the debts mount up. This comes from being diagnosed at a time when they didn’t expect to live. HIV was a death sentence.’

And of course in those days the stigma of that diagnosis was even greater than today.

‘Yes and stigmatised people shy away, they don’t make demands or ask for help. They’re also very grateful for anything that people do for them, the slightest thing. There isn’t at all a culture of expectation.’

Can we turn this poverty trap around?

‘Probably not. Ageing people living with HIV rely on charities but we’re also a shrinking bunch. These people are dying. The percentage of older people living with HIV is expanding but the actual number is smaller. As the cohort shrinks the services will disappear and no one will pump money into disappearing services, certainly not the government.

‘Charities need better funding. The Brighton Rainbow Fund is a fabulous umbrella organisation and we’re very fortunate that it’s there, but look at what’s happening now. There is barely any fundraising during lockdown and the state does sweet f*** all.’

Days before Alan and I speak, Public Health England (PHE) was accused of sending out alarming text messages to thousands of healthy HIV+ people, incorrectly telling them they were on the most vulnerable list and to stay indoors for 12 weeks. I ask Alan what the consequences of such an error are for those he works with. He doesn’t hold back.

‘Well first to say is that it hasn’t admitted the error. It’s possible IT have texted thousands using the NHS Flu-Jab list but not everyone on that list has had a message and not everyone living with HIV has a suppressed immune system, so we don’t know exactly who it has contacted and it’s a mess. All the way through the HIV chain, PHE and the government before it have been f***ing stupid. Idiots with a terrible record on HIV. It was very good with its doomsday advertisement in 1987/88 but very little after that. It gave some money to the Martin Fisher Foundation for the anti-stigma campaign, 70k through which we developed anti-stigma films, but it wouldn’t then take action to share the message.

‘We see its failings now with Covid-19. It’s ineffective, weak. These social distancing rules are completely wrong. Is it really okay for us to go on our one daily walk past runners and cyclists spluttering out their breath on us?

‘The damage from this text message to our HIV+ clients is huge. Some got letters, some got texts, some got both and the challenge we have is to say ‘no you’re fine, ignore the letter from PHE’. Why would they believe us? In Brighton there are 2,500 people living with HIV, many of whom who are now unnecessarily scared thanks to the incompetence of PHE, their anxiety is off the scale.’