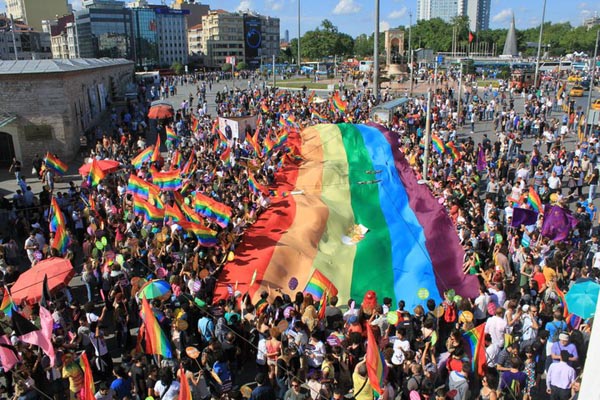 Hollie Mantle highlights the Prides in 2015 she thinks have the most to offer the international tourist and deserve checking out.

BORED WITH your local annual Gay Pride march and fancy swapping it for something international? Here is my pick of the best, the boldest, and the bawdiest marches from around the globe this year.

Turkey, on first view, may not seem like the most likely place to host a Pride event. Although the country doesn’t forbid same-sex relationships by law, intolerance towards the LGBT community is widespread, and there have been many reports of discrimination and violent harassment in recent years.

This event is therefore particularly important for the local gay community. Whereas the Pride marches in more liberal cities, like New York and London, are certainly special, there isn’t so much of a sense that New Yorkers are marching for their very livelihood, as is the case for gays and lesbians in Turkey.

Although Istanbul Pride is the Muslim world’s largest LGBT celebration, they can still use all the support they can get, so consider an Anatolian trip this summer! Tens of thousands of people flood the city around Pride weekend, so to escape the crowds you may want to stay nearer the coast – Alanya and Antalya in the South are particularly cosmopolitan cities and provide a nice, beach-side respite. Internal flights in Turkey are very reasonable with flights from Alanya to Istanbul on  Pride weekend costing as little as £26 when booked in advance with low-cost airline Pegasus.

Although discrimination against gays and lesbians in Japan is relatively uncommon, it would be a stretch to say that gay men or women can take pride in their sexual orientation: in fact, this is a country where the saying, “gay doesn’t exist here” gets thrown out casually in conversation.

Although five percent of the population – about 6 million people – have expressed an affiliation with the LGBT community, Japan is still a long way off from having a sense of pride in this association. Most LGBT people in Toyko choose to hide their love life from colleagues and friends, and have to sneak out to the more gay-friendly Ni-chōme district near Shinjuku in order to express their sexuality. This is why it’s important for the international community to get out there and support this teeny parade!

Finland, which enjoys a wide acceptance of LGBT rights and is due to legalise same-sex marriage in 2017, hosts a whole week for sexual and gender minorities in its capital, just after midsummer.

During the week, revellers are treated to various sporting events, followed by a gathering in the evening and a rainbow fair. The week culminates in Saturday’s Pride procession, which runs through the centre of Helsinki and ends up in Hakasalmen Park. The park plays host to speeches promoting gay rights, comedians, ceremonies, picnics, as well as musical and dance acts.

This year’s main theme is the working life, and there will be speakers giving information on the human rights situation in Russia, and the world of sport’s attitude towards sexual and gender minorities.

Widely considered one the gay capitals of the world, New York plays host to one of the largest Pride celebrations on the gay calendar. Since its inception in the late 1960s during the time of the Stonewall Riots, NYC Pride has gone from strength to strength while civil liberties in America have grown massively.

No matter what your queer scene, there’s something for everyone: you can join the protest action at the Dyke March, the party scene at the Dance on the Pier, or any number of other queer events all over town. Alternatively, if you don’t fancy the madness of Manhattan, then Brooklyn’s slightly more low-key affair might appeal – which begins with a twilight procession.

The Brazilians love their parades, and the gay march in São Paulo is no exception – this parade is the largest pride event in the world, regularly attracting around 2.5 million people (to put that in perspective, Pope Benedict only attracted 1 million when he visited in 2011).

This year’s festivities kick off on May 4 with the march, which begins at midday at the Avenida Paulista and ends at Praça Roosevelt in downtown São Paulo, a full 10 hours later! This year will have 25 floats, known as Trio elétricos, representing NGOs, unions, and even the government. This certainly won’t be a party to forget!

A whole month’s activities are then hosted by the city, from literary festivals and sporting events to lively debates.

Widely considered the gay capital of Britain, Brighton hosts the biggest gay event of the UK year in August.  It’s become so popular that in the last few years the organisers have had to start charging for entry into Preston Park (the finishing point of the march, and main party arena).

However, don’t feel like you’re getting fobbed off. The price of a ticket goes towards community fundraising for The Rainbow Fund (a company which works with local LGBT and HIV/AIDS organisations), as well as first-class entertainment – in the past A-list acts like Paloma Faith, Fatboy Slim, Sam Bailey, Blue and Boy George have all performed.

If you don’t fancy shelling out for a ticket, then there are numerous other places to party on the day. The Village Street Party in Kemp Town is a popular cheaper alternative, where many of the gay bars and clubs are to be found. Legends Bar, Charles Street Bar, A-Bar and Bar Revenge on the seafront are all a safe bet for getting down and dirty!  Also, if you’re looking for somewhere special to stay, try the crazily-themed Hotel Pelirocco – easily the most unique accommodation in the city.