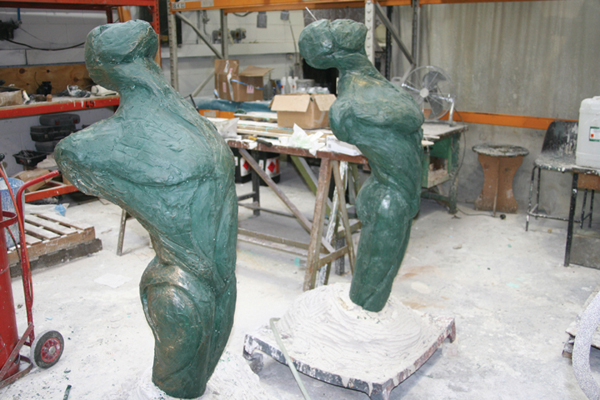 In August 2007, a man approached me in Charles Street Tap. “I know who you are, you’re a sculptor, and I want a word with you.” That man was James Ledward. James wanted me to submit a proposal for an AIDS Memorial. He was keen for someone local, and gay, to enter. To be told that the deadline for entering was in 10 days was rather daunting.

On holiday in the medieval town Pietrasanta in Italy, a centre for sculptors since the 15th century, was the perfect place for creativeness. My starting point was the internationally recognised AIDS ribbon, perhaps not original, but poignant. My idea was for two figures, touching at the base as their paths crossed, soaring upwards, intertwining, with no certainty if they would meet again. Many of those affected by HIV and AIDS in Brighton is the result of the union of two men, but the disease is not confined to gay men. Two figures would represent all those affected, one male, one genderless. My inspiration was memories of my friend Paul who had died of AIDS in the 1990s.

James and I spent months trying to find a suitable studio. During that time, public donations flooded in and I was able to revise the sculpture from a mere five feet high to something much more ambitious. This was hugely important to me as I wanted the Memorial to represent not only the tragedy of AIDS but also hope for the future with the advancement of medical treatment. In the end so much money was donated that James was able to establish the Rainbow Fund.

We found a cowshed on a farm near Cooksbridge. As studios go, it was basic; a dodgy roof, poor lighting and an outside tap. My loo was the adjoining field!

I constructed a metal armature to take the weight of the clay. After three months of making great progress, in pleasant weather, I felt it move – I put my hand up to support it, made a pathetic cry of “help” and then, realising I was trying to support half a tonne of clay, I had to let it fall around me – a Buster Keaton moment. My armature had been woefully inadequate. Back to square one with an armature of welded scaffolding poles.

Each day, up to my armpits in clay, was a joy. James would visit, give me encouragement and we would discuss the politics of the project which was quite fascinating. There were many organisations involved and negotiations to navigate. I was asked to name the sculpture – without one, public sculptures often end up with an unflattering title. Each day I ate lunch by the River Ouse with my dog, sitting there it came to me, TAY, after my friend Paul Tay.

Lunch by the river was curtailed by a harsh winter. I would be on a platform ladder sculpting in freezing weather, Toolan, my Irish Terrier, would be comfortable in the car on the heated seat!

I completed the sculpture in January 2009. The next task was the rubber mould, but the foundry workers making it were unable get there because of the snow. As temperatures at night dropped to minus 13º disaster struck. The thermodynamics of clay resulted in it turning to liquid when it thawed, and parts of the sculpture started to disintegrate before me. I secretly relished the thought of starting again, but by then a date had been set for the unveiling. I managed to save the sculpture by wrapping it in duvets and filling the draughty shed with Dimplex heaters!

The casting of a bronze is a complex and lengthy procedure, and has remained much the same for thousands of years, the oldest known example is an amulet 6,000 years old. Watching the molten bronze being poured was exhilarating.

The day the sculpture was craned into place was stressful for the large team involved, there was only one opportunity to lower it into the stone plinth with the rapidly setting resin.

It was perhaps unsurprising, given the challenges that the weather had thrown at me, that the day of the unveiling was one of torrential rain, but moments before David Furnish pulled the cord, the clouds parted and for a short while the sun peeked through the rain clouds.

I met Paul Tay at university. He died of AIDS in 1992. He was my lover, my best friend and my soul mate. When he died my greatest fear was that with time I would forget him. I never have. James Ledward gave me the opportunity to remember him in a way I never imagined possible, and for that I am truly indebted to him.