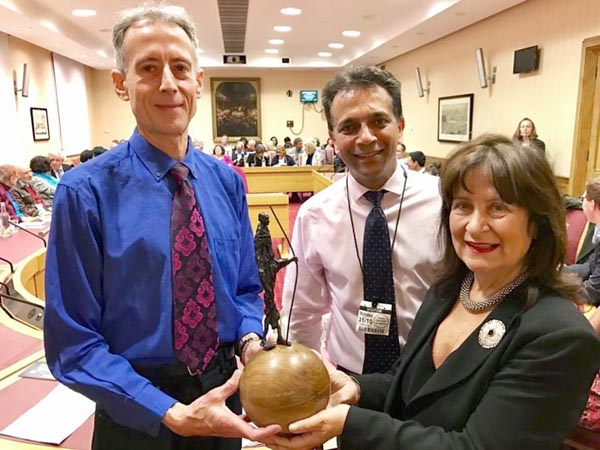 Human rights campaigner Peter Tatchell receives the Gandhi Foundation International Peace Award 2016 at a ceremony in the Houses of Parliament in London on Monday, October 31, 2016.

Peter used the award to bring attention to the people of West Papua who are suffering from a genocidal campaign against the indigenous inhabitants by the Indonesian government.

The award honours his 50 years of human rights advocacy and activism and was presented by the acclaimed human rights lawyer, Helena Kennedy QC, a member of the House of Lords.

Peter Tatchell’s consistent dedication over many decades, and single-minded pursuit in promoting human rights, and lesbian, gay, bisexual and transgender (LGBT) rights in particular, has helped to engender a greater understanding in the public mind of these important issues and created the conditions to allow laws protecting minority groups to be implemented.

He has consistently been at the forefront of progressive movements, from anti-apartheid to Palestinian rights, nuclear disarmament, democratic reforms in the Middle East and campaigns against draconian anti-terror laws in the UK.

He has achieved this through his conviction and non-violent protest, which are the hall-marks of the guiding principles espoused by Mahatma Gandhi.

The Trustees also took into account his personal bravery in confronting prejudice and putting himself sometimes in the way of violent attack but never retaliating violently. He has repeatedly risked arrest and imprisonment for exposing injustice and has been looked upon as a role model by many campaigners for human rights.

He has been able to bring together like-minded people to create momentum in promoting human rights issues, both here in the UK and around the world. The work the Peter Tatchell Foundation is doing has helped highlight human rights abuses in the Commonwealth, create dialogue between the LGBT and Muslim communities and speak out against war crimes in Syria, Balochistan and West Papua.

Responding to receiving the award Peter, said: “Receiving this award is a massive honour. My profound appreciation to the Gandhi Foundation.

“This award is in recognition of my half a century of human rights work, which began in 1967, when I was aged 15. But, of course, whatever changes I have helped bring about, they were never achieved by me alone. I was part of a joint, collective effort by the Gay Liberation Front, Anti-Apartheid Movement, Campaign for Nuclear Disarmament, OutRage! and dozens more campaign groups.

“The advances in LGBT and other human rights have always been a collaborative effort. I could not have helped secure any social change without the support of many others.

“My heartfelt thanks to all those people for their kindness, generosity and support over the decades. It is much valued – and treasured.

“Gandhi’s successful non-violent struggle against British colonial rule in India has been an enduring inspiration throughout the 50 years of my human rights campaigning.

“Forcing the British out of India – at a time when Britain was the greatest military superpower in history and was determined to continue its imperial rule – was remarkable enough. But it was all the more remarkable because Gandhi’s methods achieved self-rule and freedom without disturbing even one hair on the head of a single British soldier. He showed the enormous potential of peaceful people power.

“I have striven, often imperfectly, to adapt his principles of non-violent direct action and civil disobedience to the contemporary struggles for democracy, human rights, equality, LGBTI freedom and global justice.

“I applied those principles in my protest for LGBT rights in what was then communist East Germany (1973), my two attempted citizen’s arrests of President Mugabe of Zimbabwe (1999 and 2001), my appeal to British troops to refuse orders to use nuclear weapons (1985), my outing of 10 Anglican bishops over their hypocritical collusion with church homophobia (1994), my ambush of the motorcade of Tony Blair in protest at the Iraq war (2003), my defiance of the ban on Gay Pride marches in Moscow (2007), and my blockade of the limousine of the military dictator of Pakistan, Pervez Musharraf, (2008) to highlight war crimes in occupied Balochistan.

“Following the lead of Gandhi, the motive of my human rights endeavors is love. I love other people. I love freedom, equality and justice. The only liberation struggle worth pursuing is a struggle inspired by love. Love is the beginning, middle and end of liberation. Without love, there can be no liberation worthy of the name.

“I dedicate my acceptance of this award to the heroic people of West Papua and their national liberation struggle against Indonesian colonisation and military occupation. Since annexation by Jakarta in 1969, at least 100,000, and possibly 400,000, West Papuans have died.

“The transmigration programme to settle people from Java and other Indonesian islands is deliberately designed to make West Papuans a minority in their own land. It is part of a grand plan to swamp West Papua with non-Melanesians to erode their indigenous culture – a slow motion ‘genocide’ by demographics.

“Human rights abuses are widespread and unpunished. West Papuan protests are violently suppressed, with mass arrests. Even the mere flying of the West Papuan flag has resulted people being jailed for 10-15 years.

“I stand in solidarity with West Papuans and their right to self-determination.

“Indonesia should agree a UN-supervised referendum of the indigenous West Papuan people, to let them decide whether they want to remain part of Indonesia or be independent. It has been clear for decades that a majority want independence. They do not want to suffer any more at the hands their colonisers.

“To signal condemnation of Jakarta’s on-going occupation and repression, Western arms sales to Indonesia should be halted, as should Western economic exploitation of the country’s vast gold, copper, oil, gas and timber resources, which is taking place without the consent of the West Papuan people and without them benefiting. Everyone is profiting from West Papua, except the West Papuans. This has got to stop.

“I stand with the West Papuan people to demand: Referendum now! Then independence!

“Freedom for West Papua has been long-delayed but it cannot, must not and will not be denied.

For more information about the Peter Tatchell Foundation, click here: