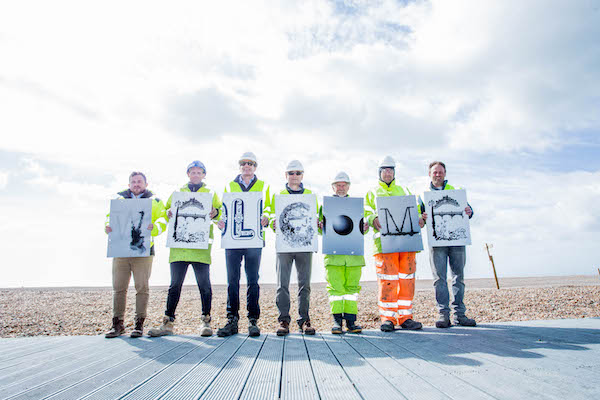 A stroll along Brighton’s eastern seafront has taken on a new look, with the opening of a new 850 metre boardwalk.

The boardwalk, which runs from the Volk’s Railway station at Black Rock to the Volk’s Workshops at the junction with Duke’s Mound, provides an attractive, safe and accessible route across the beach.

With handrails, stop off points and seating there’s plenty of chance to stop and admire the new wildlife and vegetated planting area, created as a joint initiative between Brighton & Hove City Council and Kew Gardens at Wakehurst.

The boardwalk, built by Sussex company Landbuild Ltd, has been constructed using 3,000 square metres of composite decking, made from 220 tonnes of upcycled plastic.

Work began last September with Landbuild facing a range of challenging weather conditions including Storm Eunice earlier this year, when the seafront was battered but the boardwalk withstanding some of the worst storms the city has seen.

Over 100 new boardwalk light units will be fitted next month, illuminating the main paths and junction areas.

Landbuild and Land Use Consultants have also worked with Kew to create the unique vegetated shingle wave formations, which are now home to thousands of specially grown coastal plants and seeds, provided by Kew’s Millennium Seed Bank at Wakehurst.

A unique ‘wave’ design, created from 20,000 tonnes of shingle over an area of 1,120 square metres was constructed by Landbuild’s excavators which combine satellite and steelwrist technology, the waves will help protect the young plans from harsh coastal conditions.

The boardwalk was officially declared open today by Brighton & Hove Mayor Councillor Alan Robins, who said: “I’d like to congratulate everyone involved with the creation of this wonderful new addition to the eastern seafront, from the project board team and builders to the landscapers and horticulturalists.

“This stunning new boardwalk marks another step forward in ensuring our city is accessible to all, and I’m sure it will be a huge hit with both residents and visitors as a new way to enjoy our world-famous beaches.”

The project is phase 2 of the Black Rock Rejuvenation Project, being led by Brighton & Hove City Council, with funding from Coast to Capital Local Enterprise Partnership.

The project is part of a large-scale regeneration effort to transform this part of the coastline and enable further development in the future.

Other plans for the project include restoring the Temple and Grade-II Listed Old Reading Room and a seafront classroom for children and young people to use when visiting the area.