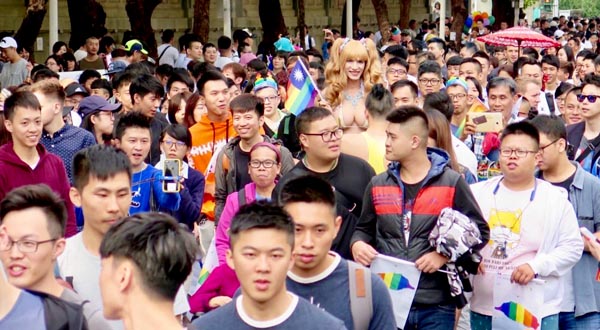 IN a historic vote, on May 17, 2019, the International Day Against Homophobia, Transphobia and Biphobia (IDAHOBIT), the Parliament of Taiwan voted to legalise same-sex marriage, becoming the first country in Asia to do so.

This landmark step follows a ruling by the Constitutional Court of Taiwan back in 2017, which ruled that legislation preventing partners of the same sex to marry was unconstitutional and violated the right to equality for all LGBT+ people.

A civil society campaign in support of marriage equality, led by the Marriage Equality Coalition Taiwan, gained strength over the last two years both at local and international levels.

Jennifer Lu, the coordinator of the campaign, has been part of OutRight’s Advocacy Week at the United Nations in December 2018 and a speaker at OutSummit, enabling her to address international policymakers directly.

The groundbreaking changes were passed by Parliament despite a referendum on the topic held at the end of 2018 showing that a majority of Taiwanese society does not support same-sex marriage.

The provisions passed by Parliament on May 17 allow for same-sex marriage as well as some adoption rights, and will come into force on May 24.

Jessica Stern, Executive Director of OutRight Action International, said: “The Parliament of Taiwan made a historic decision on May 17. They stepped up and unequivocally showed that human rights and equality are not subject to public opinion. The Parliament made a decision recognising that love is love, regardless of gender, and that everyone who wishes to formalise their relationship and benefit from the corresponding protections of the state can do so, regardless of whether their partner is of the same or different gender. With this groundbreaking decision Taiwan becomes the first country in Asia to recognise same-sex marriage. It is incredible that the decision was made on International Day Against Homophobia, Transphobia, Biphobia and Interphobia, sending the strongest possible message against hate and discrimination and for recognition of the human rights of LGBT+ people.

But while the Parliament deserve immense credit for taking this brave step in spite of opposition, it could not have happened without the relentless courage and perseverance of LGBT+ activists in Taiwan. Their success brings hope, and inspiration to LGBT+ movements in Asia, and around the world.”