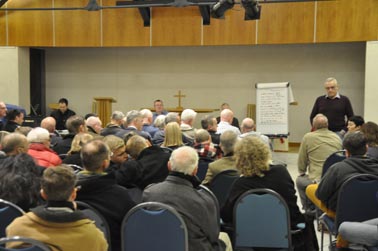 Over 100 people packed into the Dorset Garden’s Methodist Church on Friday evening (November 30)  to attend the St.James’s area community meeting Reclaiming the Neighbourhood, called to discuss issues affecting the local community following a recent violent attack in the area.

The event was independently chaired by local businessman Christopher Gull and facilitated and financed by the LGBT Community Safety Forum.

The main concerns voiced by local residents included drug dealing, drunkenness, concerns about cyclists cycling the wrong way down St James Street and general lawlessness and violence on the streets.

A large majority of the audience indicated they did not feel safe out on the streets after midnight.

There was unanimous support to create a new local action team (LAT)  for the St James’s area with immediate effect to take the decisions of the meeting forward which included exploring with the council the possibility of making St James’s Street a pedestrian priority area. A vote was taken to ask the deputy leader of the council Phelim McCafferty to take this view back to the council for discussion and for someone to report back to the new LAT. A proposal was suggested to make the area Pedestrian Priority every Saturday’s as a ‘pilot test scheme’ for an agreed period. The general concensus expressed was that the granting of Pedestrian Priority to the area was vital to the gentrification of the area which would ultimately result in a reduction in crime.’

Some residents raised concerns that the presence of  local politicians on the LAT resulted in these forums becoming toxic and political battlegrounds rather than a place for residents concerns to be debated.

Thirty volunteers came forward at the end of the meeting to sign up to a new politically free LAT working panel.  This panel will meet in the next two weeks to elect a committee and then start the process of putting into action the changes discussed.

Local activist Chris Cooke, is stepping down from his current role as Chair of the LGBT Community Safety Forum (although he will remain on the committee) to be the acting Chair of the new LAT during this transition period. Chris a former chair of the LAT is experienced in community activism and has resigned as a member of the Labour Party so he can be neutral during the process.

“The new LAT will work closely with statutory authorities and other agencies to effect the changes the community has voiced “loud and clear” at the public meeting on Friday.  It’s a fresh start, and the action group will be independent, transparent and politically neutral. On Friday we witnessed residents take charge of their own community and I cannot wait to get process started with the new team”

Local MP for Kemptown & Peacehaven Simon Kirby agreed to write to the local supermarkets reminding them of their responsibilities to the local community.

Katy Bourne the new Police and Crime Commissioner confirmed her commitment to making local communities safe and gave a grant of £250 to help the LAT move forward with their plans.

She tweeted after the meeting:

“Well done for organising the meeting, the huge turnout showed people’s commitment to their community. Great to see residents re-starting the St James LAT with support from local businesses. Great start and congratulation.”

“That was a very productive public meeting, chaired for the benefit of all. Happy for the local police to play our part.”

If you are interested in working to make St James Street and the surrounding area a safer place to be contact:

Chris Cooke can be contacted at: chrismartyncooke@yahoo.co.uk