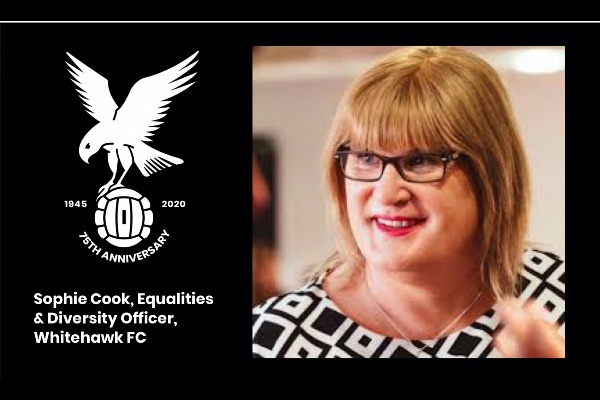 Whitehawk FC has announced that Dr Sophie Cook FRSA will be the club’s first Equalities & Diversity Officer, taking up her role in readiness for the 2020/21 season, Whitehawk FC’s 75th Anniversary.

The Equalities & Diversity role is an FA initiative designed to ensure that all non-league football clubs are compliant with current relevant equalities and diversity standards, including those developed by the Isthmian Football League, Sussex FA and the FA.

Sophie Cook is one of the most prominent transgender writers and broadcasters in the country, and was the first transgender woman to work in football’s Premier League as club photographer for AFC Bournemouth following her transition in the summer of 2015.

She is an in-demand public speaker, delivering keynote talks internationally including a TEDx Talk on change, fear, vulnerability, diversity, mental health and LGBTQ+ workshops for high profile organisations such as JP Morgan, Virgin Media, Asda and Stonewall. She regularly speaks at football events for Fans For Diversity and visited Moscow to speak to LGBTQ+ activists during the 2018 FIFA World Cup.

Sophie is also the Player Manager of Whitehawk FC’s LGBTQ+ team Rainbow Rovers, and is listed in the top 20 of the 2019 Brighton Power 100; the 100 most influential people in the region.

‘We are delighted to appoint Sophie to this new official role. She is a Hawks fan, has been instrumental in setting up Rainbow Rovers and has lots of ideas for making the club even more inclusive.’

‘Football holds a unique position within our society to carry the message of diversity and equality into areas that are often ignored and written off. The game is a universal language that transcends social barriers and I am delighted and very proud to be the first equalities and diversity officer at Whitehawk FC.

‘Rainbow Rovers sends out the message that the beautiful game belongs to everyone regardless of sexuality, gender identity, race, religion or gender’