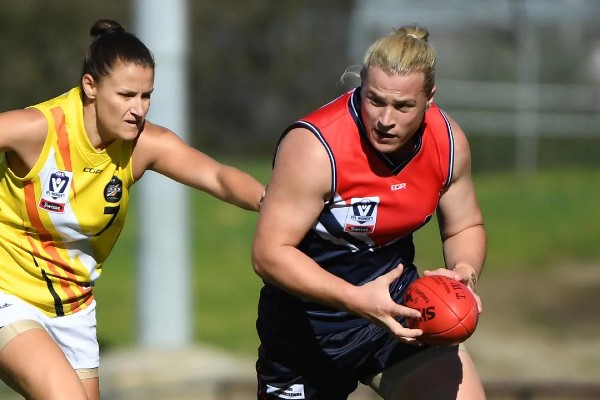 Hannah Mouncey, a 31-year-old football player from Canberra, is suing the Australian Football League (AFL) after it banned her from joining the professional women’s football league. Mouncey is suing the organisation for discrimination, saying she has given up her fight to join the elite AFL women’s competition, but is hoping for a legal clearance to play at a state league level.

Mouncey posted a statement on Twitter regarding her decision to sue the AFL: “This is a statement I hoped I would not have to make. However after being made aware that word of the below potential actions had become known in some, however small, parts of the media I can confirm that unless we are able to resolve the issue I will be taking the step of proceeding with legal action against the Australian Football League and its Gender Diversity Policy (Elite). This is not a step I take lightly and not one which I have had any desire to take if it could be avoided, however I believe at this point I have no other option if I want to play football in the AFL Canberra First Grade Competition in 2021.”

She continued: “This is not a step I take just because being able to play football is important to me, but it is because for too long the trans community has been on the fringes of society and marginalised. Trans people deserve to be treated with the same amount of respect and dignity as the rest of society, to be made to feel a valued part of the community.” Mouncey’s decision to take legal action against the AFL came shortly after JayCee Cooper, a 33-year-old trans woman from Minneapolis, sued USA Powerlifting after she was banned from competing in state championships. Like Mouncey, Cooper is suing for discrimination against her gender identity.