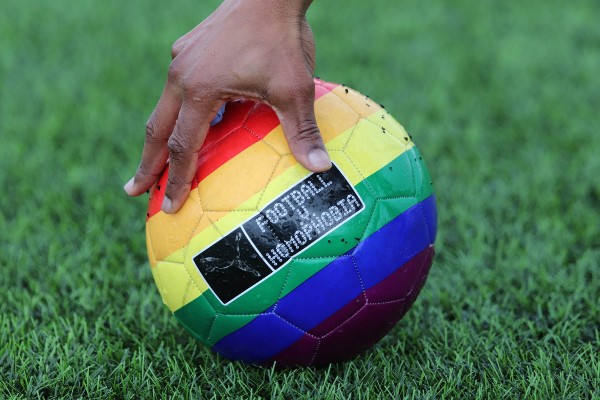 The ongoing Battle against Homophobia in Football

In 2020 it’s a sad fact that homophobia in football is still very much an active issue for players, supporters and clubs. It still doesn’t get as much publicity as racist behaviour. Why should perceived sexuality be used to insult footballers? Thankfully, local clubs and groups are doing their bit to fight this problem and are using innovate ways to challenge these negative narratives.

A player being abused because of the colour of their skin can’t hide the fact they are black. LGBTQ footballers can choose not to draw attention to their sexuality. Unless specifically playing for an LGBT team, a footballer may choose to remain very much in the closet fearful of the inevitable abuse that will be aimed at them if they came out. This is a sad refection on the Ugly secret within the Beautiful Game today.

There are 91 teams in the Premier League and English Football League without a single out player. With so many players, it is inevitable that there are more than a few current gay players. None yet have come out. It would need a brave person to do that but it has happened off the pitch.

Sophie Cook was on the Bournemouth staff as a photographer and became the first transgender person to work in the Premier League. It wasn’t an easy task as and it’s documented with a frank honesty in her book – ‘Not Today: How I Chose Life’.

Writing about her decision, Sophie admits that she “had friends that were concerned for my safety” but “rather than abuse and hatred I was greeted with love and respect from fans, players and management alike.”

Other players have revealed their sexuality but only after their playing careers have ended. What might happen to a footballer who revealed he was gay or bisexual? The case of England international Justin Fashanu who, after coming out, suffered terrible negative attention which impacted on his mental heath and contributed to his suicide. His brother John Fashanu spoke of how Justin wasn’t prepared for the backlash that followed his coming out.

The women’s game is very different for LBT players. Active players have come out as gay, even announced upcoming marriages. Other sports have seen active competitors reveal their sexuality, so why is it so different for a male footballer to come out?  It can’t be the macho image of the game as there have been rugby players who have revealed their sexuality. Perhaps there is more a toxic masculinity crisis in football.

Statistics from Kick It Out showed an increase of 12% in the number of cases of discrimination related to sexual orientation during the 2018/19 football season, hardly encouraging for anyone considering coming out. Gay broadcaster Peter Price has regularly advised players not to come out.

With a lack of out players to target and abuse, the homophobia is instead aimed at clubs.  Brighton and Hove Albion games regularly see insults thrown at their supporters. Fans experience homophobic abuse thrown at them, most cis straight people,  simply because of the recognition of a high LGBTQ community in the city. Mere unconfirmed rumours of a player being gay has led to abuse.

It’s a myth that members of the LGBTQ+ community aren’t interested in sport. There are groups up and down the country that see members of our community playing, watching and talking about sport.

Local group Brighton Lesbian and Gay Sports Society (BLAGSS) offer their members many sports to play and one of the most popular is football. There are both male and female teams.

Former Liverpool manager Graeme Souness is highly critical of the lack of work being carried out in this area. He took part in the Brighton Pride march last year. His view is that “football has not created an environment where anyone would feel comfortable of confident about saying “I’m gay.””

Recent years have seen supporters clubs for LGBTQ fans set up and the numbers joining are rising. Stonewall have been highly active with their Rainbow Laces campaigns. Also, the organisation Football v Homophobia has carried out some great work in spreading awareness of the problem.

We’re currently in Football v Homophobia Action Month. February 9 saw the first ever awards ceremony held in Altrincham. The event recognised the hard but invaluable work that is being carried out up and down the country in this field.

Local side Whitehawk FC came second in the non-league category. Last August saw them stage a ‘Football United – A Celebration of Togetherness’ that featured former Premier League players and a Rainbow Rovers’ side.

Sunday February 23 saw two games being played at the Sussex County FA in Lancing to mark this special month. The Men’s and Women’s sides from BLAGSS taking on teams from the Sussex County FA and both BLAGGS teams winning their matches.  More details at development@SussexFA.com

These kind of events, high profile, inclusive, open and welcoming to all LGBTQ+ people, organised and run by and for LGBTQ people are so important in the fight against homophobia in football.

More awareness must be spread of the problem and as a good as an action month is, we must realise this is an ongoing battle and one that must be won. Follow the link for more details about Football v Homophobia or follow their Instagram or  excellent twitter account here.