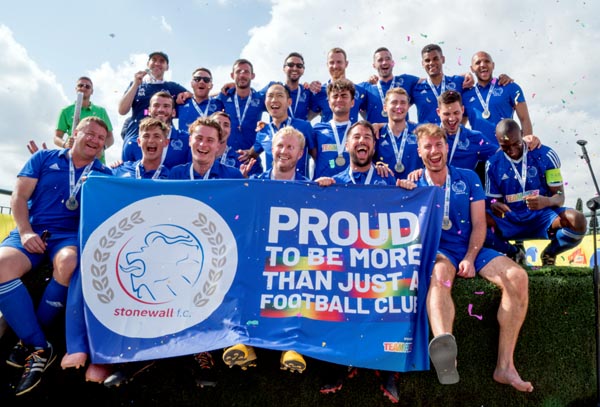 Stonewall FC won their sixth consecutive IGLFA European Championships this weekend as their Stonewall Lions team claimed victory at the Eurogames in Rome.

AFTER a gruelling three days of football in the 30 degree Roman heat, the Lions retained their title with a 4-0 win over fellow London LGBT+ side, London Falcons.

Manager Eric Najib said: “It was a tremendous effort from all my players and staff and we are delighted with the result which sets us up nicely for the upcoming domestic season”.

Chairman Alex Baker added: “The IGLFA European Championships at Rome Eurogames was a fantastic footballing event, demonstrating the continued importance of having inclusive environments for sports participation. I’m immensely proud of the team for having won the tournament.”

Stonewall FC, the most successful LGBT+ football club in the world is based in London and sponsored by TeamPride.

Stonewall FC provide access to football for people of all levels of ability regardless of age, gender, race, religion or sexuality.

Stonewall FC was established in 1991 and continues to be a safe space for sporting participation and is proud to be more than just a football club for so many.

For more information about the EuroGames in Rome, click here: