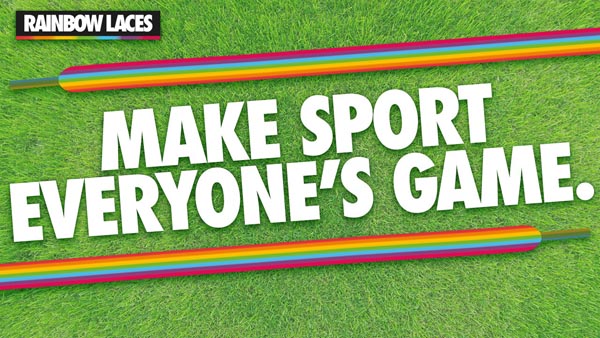 Footballers from all Premier League clubs, and a number of clubs in the Championship, League One and League Two, English Football League, Premiership Rugby and Welsh Rugby will wear rainbow laces today to support the  Stonewall campaign.

Other activities include teams wearing Rainbow Laces during training, laces being handed out at weekend fixtures and clubs organising meetings between LGBT fan groups.

The Wembley Arch will also be lit up in rainbow colours tonight, November 26 and the Professional Game Match Officials Limited (PGMOL) are also joining in, with referees lacing up for this weekend’s fixtures.

Premier League executive chairman, Richard Scudamore, said: “The Premier League is all about exciting, passionate and unpredictable football that is for everyone, everywhere. The Rainbow Laces campaign complements the work clubs are doing to promote inclusion and diversity in their stadiums, and across all levels of the sport. Our support for the campaign, and the decision to become members of Team Pride, is further recognition that the LGBT community is a vital and integral part of our community.”

Ruth Hunt, Stonewall’s chief executive, added: ‘The research we released earlier this year gave a clear indication of what needed to happen for sport to become more inclusive. Research made it clear that if things were going to change we would need the support from across sport. It’s crucial for organisations like the Premier League, The Football Association and the Rugby Premiership to show they welcome lesbian, gay, bi and trans people. At the moment, many LGBT people want to take part in sport, either as players or fans, but the abuse and hate from a minority of fans can make them feel unsafe, unwelcome or unable to be themselves.

“We know the majority of sports fans want a better, more inclusive game. This campaign is about encouraging people to step up and say they will not stand for abuse and the support of football and rugby clubs and associations is crucial because it gives people the confidence to do that.”

Funke Awoderu, the FA’s inclusion & diversity manager, said: “Our support for LGB&T inclusion remains a continued priority. This year’s Rainbow Laces campaign sees football coming out in force to celebrate the relaunch of the campaign. We are proud of the overwhelming support from leagues, clubs and fan groups.”

Stonewall has developed a range of measures to tackle homophobia, biphobia and transphobia in sport including a sports toolkit for grassroots and community sport teams to build awareness and understanding of the issues affecting LGBT people, and how they can help ensure all sports offer an inclusive and welcoming atmosphere.

Stonewall will work with all of the clubs involved in Rainbow Laces to support their activities.