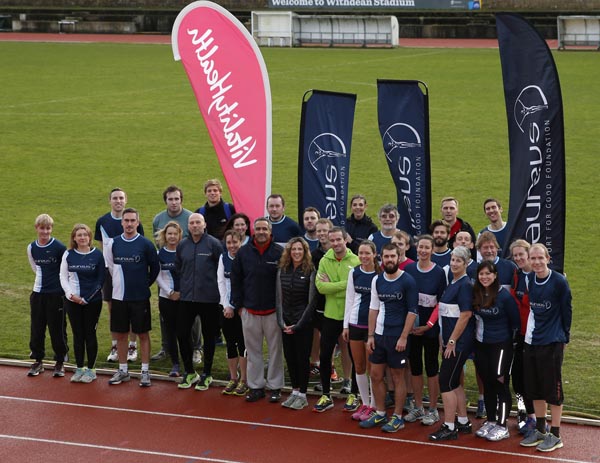 Olympic champions Sally Gunnell and Daley Thompson hosted a training day today for Laureus Fundraisers ahead of the Brighton Half Marathon in February.

A group of Laureus fundraisers joined former Olympic Champions Sally Gunnell and Daley Thompson today to benefit from an exclusive run training session ahead of the Vitality Brighton Half Marathon.

Runners were provided with a series of general fitness, nutrition and hydration tips from England athletics coach Nick Anderson, before being put through their paces at the Withdean Athletics track in Brighton with Daley and Sally.

Daley, a member of the Laureus World Sports Academy, said: “Training sessions like today can really help to boost motivation. Sally and I have passed on a few tips and now it is down to the runners to put in the hard work ahead of race day. I wish them the best of luck for both the competition and their fundraising efforts. The money they raise will help Laureus to fund sports coaches across the country, who will use sport to help improve the lives of disadvantaged young people.”

Sally Gunnell added: “I’ve really enjoyed meeting the fundraisers today and I hope that we have provided the runners with some useful advice ahead of their big race. I’m always impressed to see people setting themselves fitness goals and combining this with a fundraising target too. Good luck to all the Laureus fundraisers on race day!”

Laureus fundraiser, Helen Cowan from Brighton, who attended the training session said: “It has been a fantastic day, I’ve picked up some really useful tips, although I think it is has now prompted even more questions about my training! I’ve run over ten marathons, including the Brighton Half Marathon, in the past, but am hoping today’s training session will help me to improve my race day performance this year. I decided to support the Laureus Sport for Good Foundation this year because of the work they do to help the lives of young people across the UK. I look forward to hearing how the money raised will be put towards a great cause.”

The Laureus Sport for Good Foundation’s aim is to help change social problems around the world. Since 2000 they have raised over €60 million which has improved the lives of millions of young people.

Funds raised by #TeamSportforGood runners taking part in the Vitality Run Series, which includes seven half marathons and one 10km race between now and October, will go towards training 1,000 sports coaches who will work with 100,000 young people across the across the UK, using the power of sport to change their lives.

There are eight exciting Vitality Series runs in 2015, which competitors can sign up for: • Brighton Half Marathon, February 22

Laureus is a universal movement that celebrates the power of sport to bring people together as a force for good.