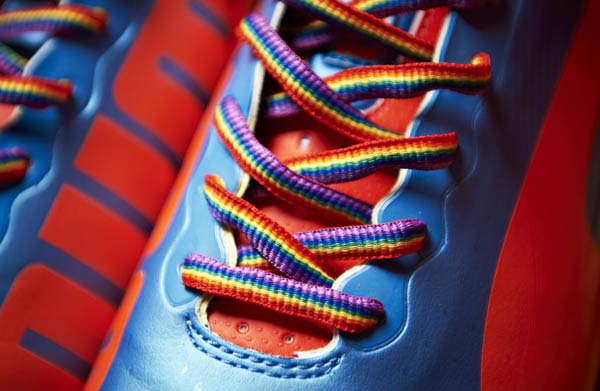 Stonewall the LGB equality charity have teamed up with community club, FC United of Manchester and Homeless FA to continue tackling homophobia in football.

FC UNITED of Manchester, the popular non-League football club, has created a video in collaboration with Stonewall to support the successful Rainbow Laces campaign. The video talks about the impact of homophobia in football and discrimination in sport.

Andy Walsh, FC United of Manchester General Manager, said: “FC United is proud of its record in not discriminating against anyone and promoting the cause of equality. Supporting the Rainbow Laces campaign and encouraging others to do the same was something we were pleased to do. Hopefully it will make a difference in football and help to change attitudes across the game.”

Homeless FA, the national homeless football association, has also been working with Stonewall around their Rainbow Laces campaign. They feature as part of the players’ programme around perception change and tackling discrimination in football.

Gareth Parker, Head of Homeless FA, said: ‘There are any number of reasons that can lead to a person becoming homeless, and we know that sexual orientation is one of them.”

“The football is an important part of our work but it’s what happens off the pitch that matters most. Homeless FA’s job is to tackle the negative stigma around people who experience homelessness, and promote the positive self-perception of our players. That is why we wear Stonewall’s Rainbow Laces with pride at all of our events, including at the recent Homeless World Cup in Chile.”

Juliet Chard, Campaigns Officer at Stonewall, added: “We’re extremely pleased and excited to be working with such diverse clubs and organisations such as Homeless FA and FC United of Manchester to tackle homophobia in sport. While we value the huge support the campaign received in September, we’re absolutely committed to tackling these issues throughout the year with individuals and clubs right across football.”

Rainbow Laces received official backing from the Premier League and high-profile support from Thomas Hitzlsperger, FA Cup winners Arsenal and Premier League champions Manchester City and aims to tackle one of the most persistent challenges in sport: homophobia in football.

For more information about the Rainbow Laces campaign, click here: