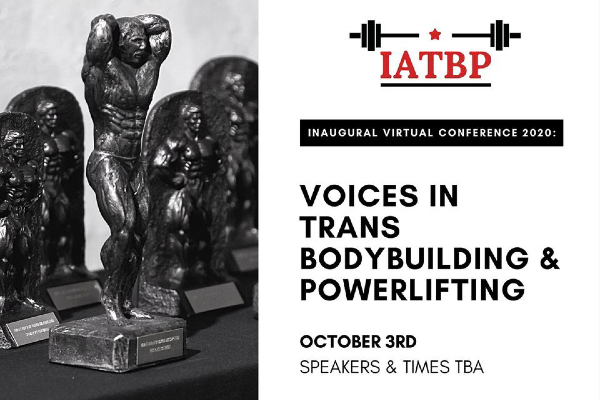 The International Association of Transgender Bodybuilders and Powerlifters (IATBP), which usually hosts a bodybuilding contest and powerlifting meet in Atlanta, USA, will this year be holding the free IATBP Inaugural Virtual Conference 2020: Voices in Trans Bodybuilding and Powerlifting on Saturday, October 3 from 4.50PM (BST)

IATBP say: ‘Due to this year’s unprecedented circumstances, we have decided to take the event online to give a platform to trans athletes in strength and physique sports to host workshops and roundtables on a number of issues, from how to be a successful bodybuilders to the problems faced by transgender powerlifters in the sport.’

The conference is free to attend and will be held on Saturday, October 3 from 4.50pm (BST).

The International Association of Trans Bodybuilders and Powerlifters (IATBP) is an an organization created for bodybuilders and powerlifters who identify as Trans (belonging at any level of the Trans spectrum) as well as Non-Binary/Gender Non-conforming people.

IATBP is the first official organization that was created specifically for athletes who are not on the gender binary spectrum, in order to give them a platform to compete fairly.

In 2014, the first competition was hosted in Atlanta GA at the first annual FTM Fitness World Conference. In 2015, it was featured on major media outlets including CNN and Al Jazeera America; in 2016 it was featured on CNN Great Big Story and in 2017, the documentary Man Made was released. IATB (International Association of Trans Bodybuilders) was officially created in 2018 as a separate organization and the P (Powerlifters) was added in 2019 in order to be more inclusive.