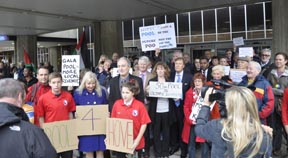 Mike Weatherley, the Conservative MP for Hove and Portslade, met with around 75 supporters from his 50m swimming pool protest campaign outside Hove Town Hall this afternoon.

THE GROUP lobbied councillors as they arrived for todays full council meeting where Mike was handing in his petition in support of a 50m swimming pool on the site of the King Alfred Sports Centre in Hove.

The 2000 signature petition was signed by among others, Olympic Diver Chris Mears and swimming champion Karen Pickering MBE.

Mike has been actively supporting new state-of-the-art sporting facilities in Hove. Last year he hosted a public meeting attended by hundreds of residents on the redevelopment of the King Alfred site and he also spoke at a Brighton & Hove City Council Policy & Resources meeting in order to keep the desire for a 50m swimming pool alive.

He said: “This 50m pool campaign has received huge support from residents across Brighton & Hove, as well as local swimming clubs and national swimming celebrities. I have been clear that I will only support proposals that include a flexible 50m swimming pool and this petition highlights the strength of feeling amongst residents on this matter. I want to thank everyone who helped make this petition so successful and look forward to seeing innovative designs for the King Alfred in the near future.”

In his speech to the full council meeting, he said: “The beauty of a flexible 50m facility is that every now and then, perhaps during early mornings and Friday evenings, it would be transformed into all of its 50m glory and used by the more serious swimmers – many of whom are children…There are large economic benefits too. A 50m pool that can be used for galas will attract teams from all around the country and, indeed, the continent. These teams will use our local hotels and local restaurants. They will use our shops and spend money at our attractions. Any other configuration will fail in that regard.”