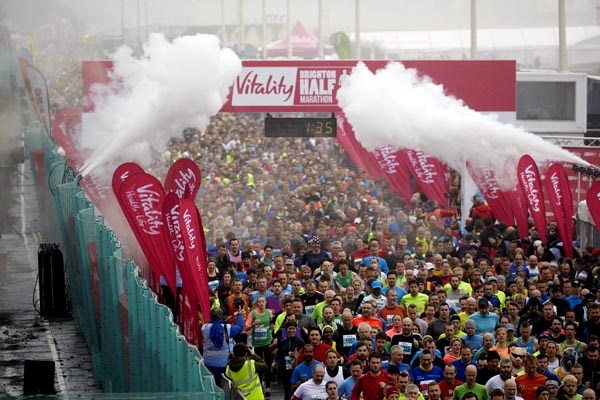 Earlier this month Brighton Half Marathon was contacted by UK Athletics following concerns raised regarding the length of this year’s course and the course in 2015 and 2016.

Over recent weeks the organisers of Brighton Half Marathon, The Sussex Beacon have been conducting a formal investigation into the matter and have found that unfortunately the course has been short by 146 metres (0.09 miles) for each of these particular race years.

The area of concern centred on the turning point just after mile four where the course passes Roedean School, on the cliffs between Brighton and Rottingdean, before turning and heading back towards Brighton.

Concerns raised by UK Athletics’ were not observational regarding the course layout, but were based on an analysis of GPS data.

The accuracy of GPS devices is a hot topic within running at the moment, with some runners reporting variances for the race both under and over the correct half marathon distance. However, internal investigation by the race organisers has looked not only at runner data, but also internal procedures for delivering how the course was set out for each event.

Organisers have concluded that the eastern turning point has been positioned incorrectly over the last three half marathons, resulting in a shortfall in the overall half marathon distance.

Sussex Beacon say they are “devastated” that this mistake has happened and apologise unreservedly to all runners who took part in the affected race years.

Simon Dowe, CEO of the Sussex Beacon, HIV charity which organises the race, said: “We can’t apologise enough for this mistake. I know it’s hugely disappointing to everyone who trained so hard. I also know that for some, the news will be devastating as it affects race times, personal bests and records. Our thoughts are very much with the runners. I’m so sorry that their remarkable achievements and the money raised for good causes may be overshadowed by this error.”

Race Director Martin Harrigan from E3 Group, added: “We are a team of runners ourselves so we fully understand the impact of this news. We are really upset that this mistake has happened and we take full responsibility for this situation. We remain committed to making the 2018 Brighton Half Marathon a great event.”

This years half marathon was started by international Superstar DJ Norman Cook (aka Fat Boy Slim) who after starting the 8,000 runners off ran himself in the race to raise money for the charity Young Epilepsy.

Team Beacon runners who ran to raise money exclusively for the Sussex Beacon who are presently in danger of closing, raised in excess of £30,000.

The Sussex Beacon offers specialist care and support for men, women and families affected by HIV. They operate 365 days a year to help people manage the everyday realities of living with this life-long condition.

Their 10 bed Inpatient Unit helps people living with serious HIV related illnesses, initiating new drug therapies or struggling with some of the extreme side effects of anti-retroviral drug regimes.

They run services for women and families and a regular day service for socially isolated people with complex medical conditions associated with HIV. They also offer end of life care.