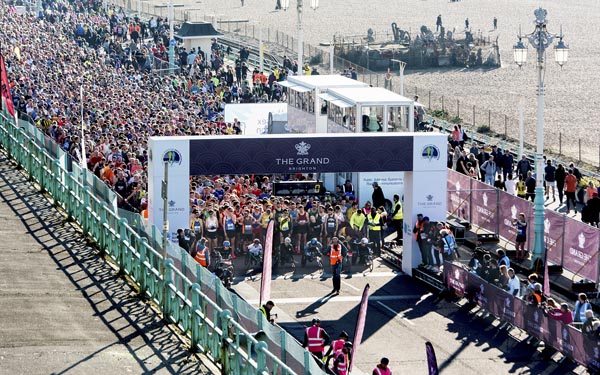 The Grand Brighton Half Marathon celebrates its 30th anniversary in 2020, marking a very special race year for the popular half marathon.

ORGANISERS have some exciting plans up their sleeves to mark the big birthday on Sunday, February 23 next year, including an anniversary medal and a line up of race ambassadors who will help to celebrate the history of the race.

The Grand Brighton Half Marathon’s Race Director, Martin Harrigan, said: “2020 marks a very special year for the race as we celebrate our 30th birthday. The race has grown enormously over the past three decades as more and more people have taken up running and we’re so proud of the event it has become. We’ll be marking this very special race year with a 30th anniversary race medal, so whether it’s your first Brighton Half or your 30th, this is a year not to be missed!”

Sussex Beacon Chief Executive, Bill Puddicombe, added: “The Grand Brighton Half Marathon is a big day for the Sussex Beacon, but also for all the other charities who take part and fundraise on the day. There are so many different ways to get involved – as a runner, as a Relay Team, or as a volunteer helping out on the day. It is the thousands of people that turn up, participate and cheer on the runners who create the party atmosphere for this great event.”

Organisers are keen to hear from any runners who took part in the early races in the 1990s. Whether you have a story to share from a particular race year, photos of your medal collection, or one of the early race T-shirts, email the race team. half.marathon@sussexbeacon.org.uk

David Knight, the first winner of the race, Caroline Lucas, MP for Brighton Pavilion and Martin Harrigan, the Race Director were among dignitaries at the official launch party at the Grand Brighton on Thursday, August 15.

The race is once again supported by headline sponsor The Grand, the city’s iconic seafront hotel, which is also on the course route.

Runners can choose to run for over thirty partner charities, including local charities The Sussex Beacon and Chestnut Tree House, plus national charities including Alzheimer’s Society and Macmillan.

The Grand Brighton Half Marathon has become one of the most popular – and friendliest – races in the UK since its first event in the 1990. The 13.1-mile route takes runners from Brighton’s famous pier through the centre of the city, before heading along the seafront past The Grand hotel.

To book a charity places for the 30th anniversary race, click here: