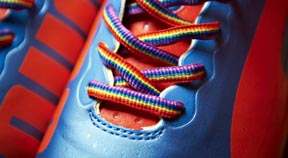 With just over 48 hours to go until this weekend’s football fixtures kick-off all eyes will be on the boots and not the ball as players from across the UK lace-up in support of Rainbow Laces – the campaign to kick homophobia out of the game.

• #RainbowLaces trends in the UK and worldwide

• Support comes in from across the celebrity world including Stephen Fry, Piers Morgan, Ricky Hatton and Michael Owen plus backing from over 35 brands https://vine.co/v/OztePDZz2tH

Paving the way in creating a welcoming environment for gay footballers, Rainbow Laces in just five days has drummed up an overwhelming level of online support and love from footballers, rugby players, politicians, celebrities and brands.

Richard Lane, Media Manager at Stonewall, said: ‘The response from clubs, players, fans, celebs and the public has been incredible. The excitement and enthusiasm that the campaign has generated is really remarkable and it’s inspiring to see a national conversation about homophobia in sport taking place. It’s up to the players now – the ball is in their court. We hope they recognise the thousands of voices calling for the game to change and lace up this weekend.”

A spokesperson from Paddy Power, added: “We’ve been overwhelmed by the support this year. Football is well and truly behind the times when it comes to homophobia and with 7 in 10 football fans admitting to hearing homophobic chants around the terraces it’s something that we can’t and it seems the nation won’t ignore. We’re so excited to have so many familiar and new faces on board supporting the campaign but want to send out a message to everyone who hasn’t already to get involved, to re-lace, re-boot and help kick homophobia out of the park.”