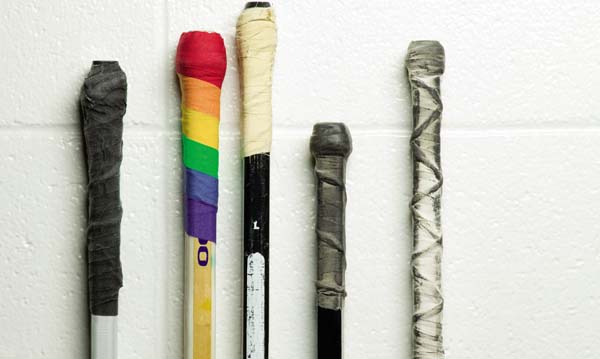 “These 6 Colours Can Change the Hockey World”.

Pride Tape was unveiled to the world today by the Institute for Sexual Minority Studies and Services at the University of Alberta (Faculty of Education).

The tape, inspired by the six colours of pride, is initially being manufactured for hockey, but will later be produced for other sports.

Speaking for the Institute, Kris Wells said: “This tape will be a badge of support from the hockey world to LGBTQ youth in Canada and other countries. It will say ‘You are welcome on the ice. Come and join us in our sport and be proud of who you are’.”

The level of support from Canada’s English language national media has been extraordinary. Every major television network in Canada is donating national air time to help make the tape a reality.

Kris continued: “The media are, in fact, saying to us – the time has come for the world of sport to change.”

When the tape is manufactured, profits from the sale will be split between the Institute and the You Can Play Project, which has played a leading role in combatting homophobia in sports.

Funding for the manufacture of Pride Tape will be raised through a Kickstarter campaigner.

Pride tape was created for the Institute by Calder Bateman, led by Creative Director Jeff McLean. A multi-media campaign is being launched today, December 18. In addition to Canada’s television broadcasters, NewAD is contributing space in restaurants and bars across Canada.

The television commercial was produced free of charge by Global, with the participation of Andrew Ference, alternate captain for the Edmonton Oilers and former captain of the Stanley Cup winning Boston Bruins.

10,000 rolls of tape will be manufactured in the first run. The Kickstarter campaign will allow for an initial free distribution of Pride Tape to local teams across Canada and beyond. The tape will also go on sale to the public.

Creative Director McLean has been immersed in hockey his entire life.

He said: “Unfortunately, all too often, sports remains a hold-out in creating a welcoming environment for LGBTQ youth. That’s why I feel so strongly about the ongoing relationship we have with the Faculty of Education and the Institute, including other projects like NoHomophobes.com, which has captured so much positive attention all over the world.”

Dr. Wells spoke of the Faculty’s appreciation for the way the corporate community and media have embraced the Pride Tape project.

He said: “It’s going to be fascinating to see how the hockey world responds.

“To us, success will mean that every young LGBTQ person can feel confident they will be welcome in sports environments – as players, spectators and fans.”

For more information about the Pride Tape campaign, click here: