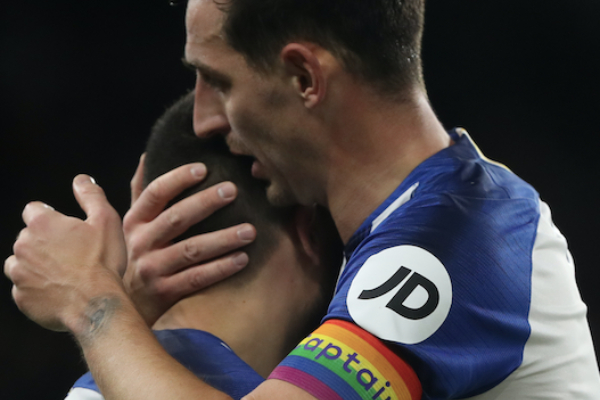 Brighton Seagulls Come Out for the LGBTQ

Riding high on their 2-1 victory over Arsenal last week, Brighton and Hove Albion (BHAFC) celebrated Stonewall’s Rainbow Laces Campaign on Sunday this weekend. The club made a clear statement in its support of not only the campaign, but the LGBTQ community which is as synonymous with Brighton and Hove as the club itself. The stadium was awash LGBTQ rainbow support and its match day programmes featured interviews with management staff and players outlining the importance of the initiative.

Rose Read, head of people and culture at the Albion stated “we were so overwhelmed with the reception we received from the community in having a presence at Brighton Pride, as a club we are delighted to be supporting again this year and to be part of such a key event in the city’s calendar”.

Player Lewis Dunk, of the club’s involvement in the Rainbow Laces campaign said “we are proud to get behind such an important campaign and we know that football has the power to bring everyone together. We stand strongly alongside the club, the Premier League and Stonewall in promoting equality and diversity”.

However, Graeme Souness former player whose career highs included playing for Liverpool, managing Rangers and playing as captain of the Scottish national team in the 1980s, stated that at the highest level, football still needs to do more. Speaking after the Albion game on Sunday as part of its television coverage he said: “Football, PFA and the Premier League have to look at themselves and ask ‘why has no one even came (sic) out’? Football has not created an environment where anyone would feel comfortable or confident about saying “I’m gay”.

He went on to say “there must be gay players and bisexual players playing in the premier league there has to be, and no one feels comfortable enough to say ‘look, this is me’”.

Souness described his own generation of footballers as “extremely homophobic” specifically citing the type of banter in the dressing room. He then described that more recently taking part in the parade at Pride in Brighton and Hove was “enlightening” to him. “I found it extremely educational” he said and encouraged others that “if you want to learn more then come down here for that parade”.

BHAFC have supported Pride in the city, have a presence in the community parade and are founder members in Brighton Pride’s initiative City Angels.