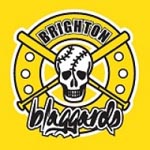 If you’ve ever been in Preston Park, and heard cries of Let’s play ball or Two and One followed by high-fives and people waving baseball bats you’ve probably come across Brighton’s very own gay softball team.

Formed in 2011 as part of BLAGSS sports group, Brighton Blaggards plays as a mixed team of gay guys and girls in recreational games throughout the season, with the opportunity to also take part in competitive games.

Most of their players were new to softball, but have benefited from coaching by experienced players from the US and Germany, and they have also taught them a whole new ‘Americano’ vocabulary that rings out during the games!

All ages are welcome, and if you can swing a bat, sprint to a base, and throw a ball, you’ll love softball….and even catching can be made easy…..because you have a great big glove on one of your hands!

Softball is very like baseball, played with a larger ball on a smaller field, with 10 players each side and seven innings per side. It’s one of the fastest-growing sports in the UK, and once you’ve hit your first run…you will be hooked.

The Brighton Blaggards play recreational games throughout the Summer in Dyke Road Park, and more competitive games at Waterhall Sports Ground. In addition to the games, there’s often a barbeque, and a chance to get to know some of the other teams locally, in a fun and lively environment. They also join up with some of the other teams to take part in national tournaments.

The Brighton Blaggards are now gearing up for the new season. They will be hosting a monthly game for all comers beginning in March, and joining up with the Hove Tuesday club for competitive games throughout the Summer.

If you’d like to have fun this Summer, try a new sport and meet new friends, click here: