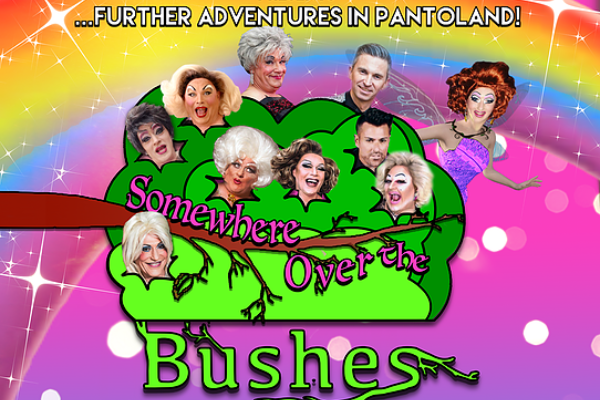 Brian Butler looks forward to Brighton’s annual alternative panto and marvels at how much talent there will be on one stage.

Over recent years Brighton has undoubtedly established itself as the biggest centre for drag artists and cabaret singers outside London. Week in week out they work tirelessly , entertaining many hundreds of avid followers and visitors across the city.

But once a year there’s the unique opportunity for us to see their different talents displayed en masse in the alternative panto.

This year the cast – of 11 performers – is staggeringly strong. Written and directed by Allan Cardew , Somewhere Over The Bushes  promises to put many of our favourite panto characters like Widow Twankey, Jack, Tinkerbell and fairies both good and evil all together in a fictitious location called Pantoland.

Problem is they can’t escape back to reality unless they can find a man. Allan told Gscene: “ I’ve written the script with each performer in mind and I’m sure its going to be great fun – they are all so talented .”

Launching the panto at the Queen’s Arms , the funny/fabulous  Davina Sparkle hosted an evening of top-rate singing with many of the show’s stars – the evergreen and emotionally dramatic Dave Lynn, the bouncy newcomer with tons of vocal power Jamie Heward , the theatrical tour de force that is Kara Van  Park, the mischievous singer with the highest notes in Brighton, Jason Lee and the comic enchantment of Stephanie Von Clitz.

Returning to its previous home, the Sallis Benney  Theatre, the show will run on various dates from 12 March . One thing is for sure – you’ll never see so much talent in one place this year.

See www.thealternativepantobrighton.co.uk for full details, to buy tickets or check out performance times.