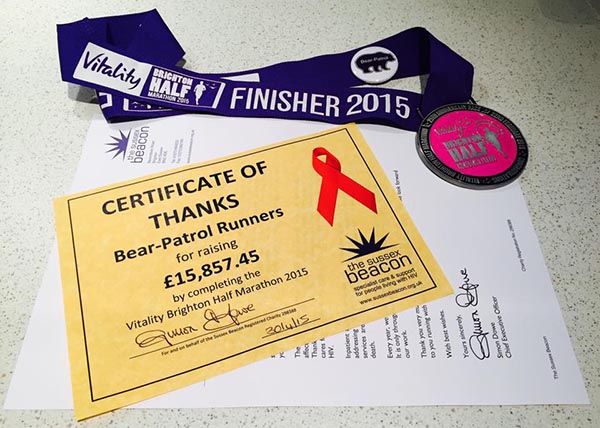 Bear-Patrol the social networking group raised £15,857.45 for the Sussex Beacon running in the Vitality Brighton Half Marathon in February 2015.

TWENTY nine members of Bear-Patrol took part in the race on Sunday, February 22, 2015, to raise money for the Sussex Beacon, with another thirty members volunteering on the day at the Mile 6 water station and in the Team Beacon runners marquee.

The total is the largest amount Bear-Patrol have raised from a single event with their fundraising.

Danny Dwyer from Bear-Patrol, said: “Well done to all the runners and volunteers who took part in the race and a massive thank you to everyone who supported and sponsored our team runners before and during the event .. this is an amazing achievement for the team and for Bear-Patrol.

The date of the 2016 Vitality Brighton Half Marathon is Sunday, February 28, 2016. Bear-Patrol are recruiting 40 runners plus volunteers to take part and top this years magnificent total.

If you would like to be part of the running team or volunteer with Bear-Patrol on the day, click here: