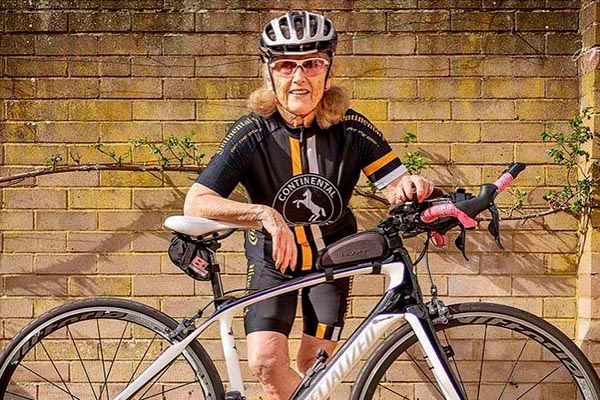 DAPHNE from Littlehampton, who turns 80 this year, will be the eldest competitor running the 10km in the Brighton Run2Music on Saturday, May 11.

She is also currently a leading triathlete and has been a Triathlon World Champion for the last 7 years in her age group, European Champion for 4 years and Ironman 70.3 World Champion in 2011 and 2017. Quite a feat for a 79 year old who shows no signs of slowing down.

Daphne took up sport 29 years ago at the age of 50. She was inspired by the Iron Man World Champion Paula Newby Fraser who became an Ironman World Champion in Hawaii an incredible eight times.

Daphne said of her continuing competitive streak; “You have to be your own inspiration. Hold your dream foremost in your own mind and never let anybody put you down. At my age it is hard to believe that I am still racing but I am, I do the training, I do the race and I have fun doing it.”

Daphne is planning on dressing as Madonna for the Brighton Run2Music as all participants are encouraged to dress as their favourite pop star and is also signed up for the Brighton and Hove Triathlon on September 15 this year.

Brighton Run2Music starts on Madeira Drive where participants will be entertained by a live DJ and other musical acts prior to commencing their race. Giant speakers will be based along the route which will include a run (or two) depending on your chosen distance, up the infamous Duke’s Mound and down again and along Madeira Drive. Live acts and bands will perform at points along the course. All the races will be timed.

The Brighton Run2Music is an event for all ages and fitness levels and participants can run, walk or dance 5k, 10k or 21k. The race encourages people of all ages and genders to run together listening to live DJs and music on big speakers along the course. Participants can dress as their favourite pop star or their musical icon whilst embracing the spirit of Brighton’s two loves – Music and running!