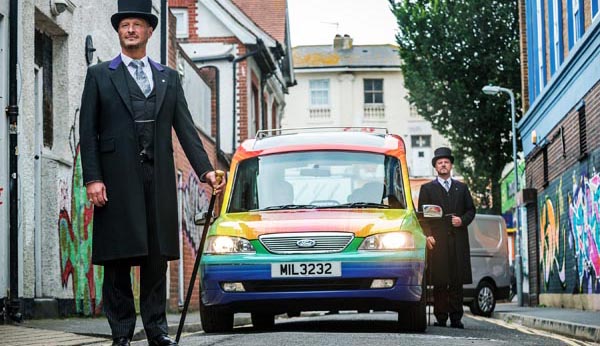 Co-op Funeralcare’s first Rainbow hearse will be unveiled this weekend.

Believed to be one of only two in the UK, attendees at Brighton Pride will be the first to see the new vehicle. It is the most recent addition to Co-op Funeralcare’s growing fleet of 7 specialist hearses, now ranging from a Land Rover hearse to a 1933 Austin and a Japanese Buddhist themed vehicle.

Originally a Ford Cardinal, the hearse has been transformed with the full colours of the rainbow.

Its introduction to Co-op’s existing fleet was driven by a request that came through Brighton’s Funeralcare team, followed by a nationwide rise in requests from loved ones who want to personalise funeral services as tributes to the lives of gay, lesbian, transgender and bisexual friends and relatives.

The multi-coloured launch follows on from a shift away from sombre send offs, a trend witnessed across the 100,000 funerals that the Co-op conducts every year.

Data released by the Co-op reveals that this is set to increase in the future as almost a quarter (23%) of Britons say they want to make their last journey in a personalised vehicle.

In addition to these findings, two-thirds (66%) of adults say that funerals are becoming more of a celebration of life and almost half (47%) of UK adults would like their own funeral to be conducted this way.

Speaking about the launch, Martin Baker, Head of Central Operations for the Co-op, said: “Personalisation within funerals is something we’re seeing more and more of as families want to reflect the personalities and interests that our loved ones had while they were alive. If a request is possible to do and there’s a demand for it, our funeral directors and arrangers will do their utmost to make it happen.

“At Co-op Funeralcare we always listen to our clients’ wishes which is why we’ve introduced the rainbow hearse to our fleet, we’re hoping it gives more families the unique and memorable send-off their loved one would’ve wanted.’’

The new vehicle will be available immediately for funerals organised by Co-op Funeralcare and can be transported to any location within the UK where requested by a loved one.

It forms part of a broader commitment to equality and diversity at Co-op, not only within local communities but also via Respect; Co-op’s award winning, inclusive lesbian, gay, bisexual and transgender (LGBT+) network.