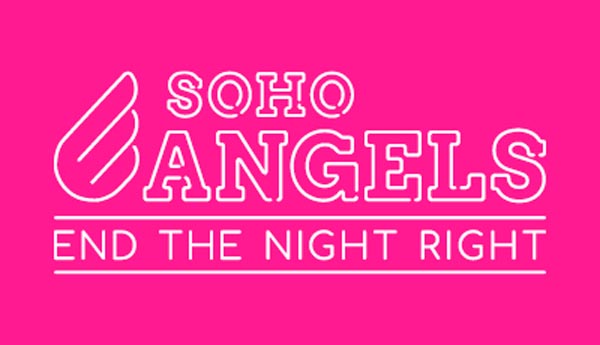 SPECIALLY trained volunteers will be on the streets of Soho this festive season, ensuring Christmas revellers end the night right.

Whether handing out water or helping people get medical attention, Soho Angels will do everything in their power to help people end the night right and safe. They will also be trained to spot those who are most vulnerable – for example, due to being on their own, or being intoxicated.

Westminster City Council and Manchester based LGBT Foundation will partner on this new night-time safety initiative, designed to make London’s nightlife a safer space for everyone, and a more inclusive and understanding space for lesbian, gay, bisexual and trans (LGBT+) people.

The Angels home base, the Soho Night Hub located at St Anne’s, will offer a safe space for people to rest, recover, get help if they’ve fallen victim to crime, or simply charge their phone. The Hub and Angels are there for anyone who needs help while out at night in Soho, whether they are residents, visitors or tourists.

The pilot formally launches today, December 7, and will run every Friday through December. From the lessons learned during this time, it’s hoped the scheme will be rolled out every Friday and Saturday from February 2019.

Councillor Ian Adams, Cabinet Member for Public Protection and Licensing, said: “From finding lost belongings, or even a lost friend, the Soho Angels are here to help everyone end the night right. The Angels home base, the Night Hub, will be a safe place to escape the bustle of Soho and sober up, get support, or just have a chat while charging a phone. The Council’s committed to making the city’s nightlife a safe and inclusive place, and we also hope this takes some of the winter pressures off the NHS. Soho is the heart of London’s nightlife, but also the historical centre of London’s LGBT+ communities. The Angels will reflect Soho’s roots and have specific LGBT+ support and training.”

Founded in 2011, LGBT Foundation’s Village Angels in Manchester have helped nearly 100,000 people and are credited with helping to reduce crime, alleviate pressure on emergency services and ensure thousands of clubbers get home safely. In 2017, LGBT Foundation partnered with the Smirnoff We’re Open campaign to begin expanding the Village Angels nationally.

Paul Martin OBE, Chief Executive of LGBT Foundation, said: “Since 2011, thousands of Village visitors have been helped by the Angels and they regularly carry out life-saving interventions. Unfortunately, we know that people can be targeted because of their sexual orientation or gender identity and that LGBT+ communities still face discrimination and barriers to accessing support. We recognised the need for similar programmes in other LGBT+ spaces across the country, and that’s why we’re proud to be working with Westminster City Council and Smirnoff to bring the Soho Angels to the streets of London.“