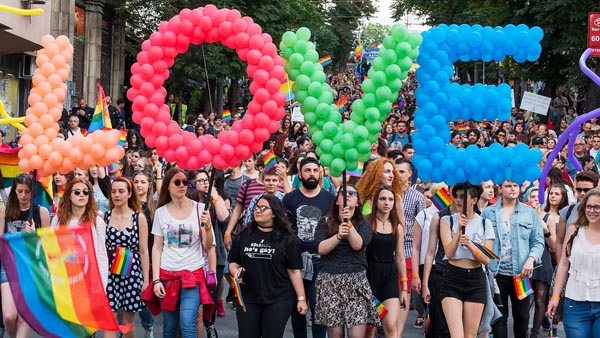 The 11th Sofia Pride will take place on Saturday, June 9, 2018 in Sofia, Bulgaria. Eleven years after joining the European Union, Bulgaria has failed to make any meaningful progress in the area of protecting human rights, especially those of the LGBT+ communities.

Bulgaria’s Penal Code does not protect LGBT+ people from hate crimes and there is still no legal recognition of same-sex civil unions.

Each year people attending Sofia Pride are threatened with physical violence by neo-Nazi groups and publicly denounced by a nationalist political coalition, which is part of the current national government.

In striking contrast with most major European Prides, Sofia Pride has never been supported by the Sofia Municipality or by any other high level Bulgarian political official. Invitations issued each year to the Mayor of Sofia to attend the event have been to no avail.

For the first half of 2018, Bulgaria holds the Presidency of the Council of the EU. Organisers of Sofia Pride want to use this opportunity to highlight their situation and force the Sofia Municipality to give Pride its due recognition.

To help them they have sought the support of the Rainbow Cities Network to which the City of Brighton & Hove is a signatory.

A spokesperson for Sofia Pride, said: “The presence of a Mayor from one the Rainbow Cities at the 11th Sofia Pride will be a great asset not only to the event itself, but also to the overall promotion of LGBT+ human rights in Bulgaria. We believe that if such Mayors attend the event, the Sofia Municipality will be required by protocol to send a representative. Once we have confirmation that a Rainbow Cities Mayor will attend, we will open a dialogue with the Sofia Municipality in order to achieve our goal.”

“Pride is of utmost importance for the LGBT+ communities in Bulgaria and we sincerely believe that the attendance of any Rainbow City Mayors will be an immense help in our efforts and we look forward to welcoming them in Bulgaria.”

In response, Cllr Warren Morgan has sent a letter of support to the organisers of Sofia Pride.

As the leader of the council in the UK city of Brighton & Hove I would like to express my solidarity with the organisers of the 11th Bulgarian Pride in June of this year.

Brighton & Hove has a long and proud history of welcoming diversity and our LGBT Pride is one of the central events in the city’s calendar. Our first Pride march was in 1973 and the festival now brings around 400,000 people and around £18million into the city – as well as enhancing our reputation as a place where people actively challenge discrimination and work towards equality for everyone who lives in, works in and visits our city.

For us in the council, equal rights for all our residents and for everyone in the UK, are fundamental. This includes people’s rights to be open about who they are and who they love. We were delighted to host some of the first civil partnerships and equal marriages in the UK and work hard with the police to reduce the incidence of hate crime and prejudice in the city. The council supports Pride in a variety of ways and many council staff, elected councillors and members of parliament are delighted and honoured to march in the parade and to enjoy the celebrations in the park each year.

Pride events across Europe and the world are very public opportunities for cities and countries to stand up for equality, diversity and acceptance. Elected officials and employees of city councils can help to make a visible commitment to inclusion and against discrimination. We applaud the organisers of the Bulgarian Pride and everyone who takes part in a march for love, mutual respect and openness.

We are sorry that no one from Brighton & Hove will be able to join your city’s Pride celebrations on June 9, but we hope that everyone who takes part will be able to celebrate their identity safely and positively. We wish you every success for a happy Pride!