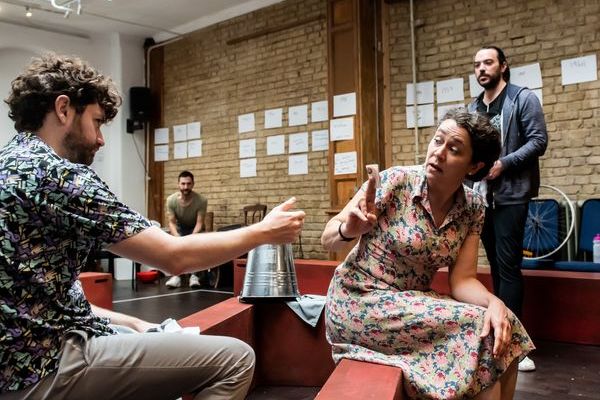 George Richmond-Scott is currently directing a new adaptation of Small Change by Peter Gill at The Omnibus Theatre in Clapham. It’s a poetic, nostalgic story about place, the passage of time and lost loves. We caught up with George to find out more.

First of all, how did you discover Small Change? “I saw another one of Peter Gills’ plays at the Donmar Warehouse called The York Realist. It was beautiful and brilliantly directed. I was struck by how intense and engaging the characters were. It was joyful, honest and painful. It has a love story between two men – they come together and realise they can’t stay together. I was very engaged by the story and the whole vibe. I read more of Peter Gill’s work and discovered Small Change.”

“The play expresses an incredible range of feelings. It really evokes place in a strong way. It’s very poetic but it also reflects real life. It shifts between modes in a very unusual way.”

How would you characterise his writing style, the word poetic crops up a lot? “There’s a lot of humour too. There’s pain, of course – there’s pain in life. There are crises but there are also moments of release and joyfulness. There’s hope in there too. It’s not easy to let go and move on but you can do it, and not get too mired in what’s gone.”

The play was first performed in 1976. Does it stand out as an LGBT+ story of its time? “I don’t think it’s a gay play in the sense that it examines what it means to be a gay man. The main character is in love with a man who’s sort of in love with him too, even though he probably isn’t gay. It’s central to what the play is about but the other characters don’t really respond to that.”

“There’s no outing scene. It’s about somebody trying to understand the person they’ve become and how they can move their life forward. He seems trapped and lost. The fact that he was in love with the guy he grew up with and it wasn’t really reciprocated is part of that, but it’s not a gay play with a capital G. Although it’s still an important part of the play’s DNA.”

“The play is trying to capture what it means to live in the present while having your past carried along with you – and the question of how you manage that in a healthy way.”

The play captures feelings we all experience, especially as we get older. “It’s about parents and children, mothers and sons. It’s different for every relationship, but it’s often a complicated or nuanced love that exists between mothers and sons.”

Tell us about The Omnibus Theatre in Clapham. “The Omnibus is a really lovely local theatre. It’s run by a brilliant woman called Marie McCarthy – she’s incredibly supportive. She’s very nurturing to the people who work here. I live nearby so it’s one of my local theatres.”

“ I did a play here three years ago when I left my directing training program called Blood Wedding. I rewrote, adapted it and directed it – the arrogance, eh? She gave me the opportunity to do something off the back of my training, and I learned a lot by doing that. The play went really well. Some bits of it I’m really proud of and some bits I’d do differently. It sold well.”

“They’ve had some building work done over lockdown. The bar has been moved – it’s more front facing and welcoming. They’ve upgraded the rehearsal rooms. We’re now rehearsing in the room that used to be the bar – it’s a great space to rehearse. They do great music events here too. They do community events also.”

“There are two theatre spaces. The main theatre sits about 90 or 100. We’ll have about 80 for this production. We’re figuring out if we need to have any spaces due to COVID restrictions. It’s been really hard. This show was set to go into production just before lockdown. We were gearing up to start and we had to postpone it.”

“The play has been postponed several times. It’s been challenging and this show has been waiting a long time to happen. I hope it hasn’t been stagnating in my head. It’s hope it’s done that Christmas cake thing of soaking and becoming richer – we’ll see, I think it has.”

COVID has been very tricky for the theatre industry, how have you coped? “Some people have left the industry and that’s a terrible shame. Others have carried on and really struggled. I was lucky – I managed to get a job in a drama school. Initially I was out of work – I was working on Jamie in the West End and that just stopped. I was doing nothing for a bit in late spring, and then got lucky and secured the teaching job. I’m still doing some stuff there now.”

“People who work in theatre tend to be very resourceful and creative. But people are finding that they’re human and there’s only so much you can take. You can’t endlessly be resourceful with nothing. You need to feel supported in some way, as well as ducking and diving.”

So, for someone who hasn’t heard of Peter Gill or Small Change, why should they come and see the show? “I would say it’s a beautiful, vivid evocation of life and love. It’s about how parents and children overcome difficulties together. You can search for a moment in your past that defines you, but in the end you have to take responsibility for yourself in the present to live a full and rewarding life. You’ll leave thinking about life and love and how you treat yourself and other people.”

Small Change will run from 14 September – 2 October at The Omnibus Theatre.