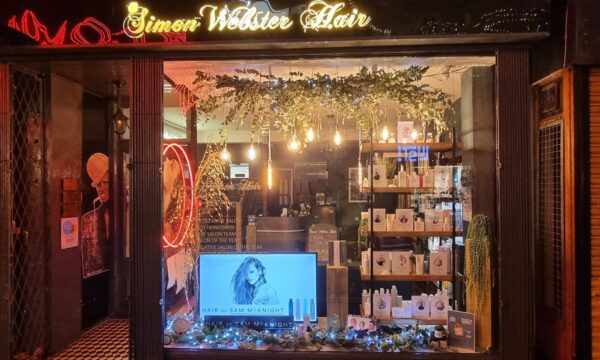 Over 20 businesses in North Laine and The Lanes took part, with over 880 residents voting for their favourite festive display, over the six week period. Simon Webster Hair received the most votes for their chic festive dressing which included lush foliage and twinkly fairy lights, to be named the winner and pocket a £150 cash prize.

Shelley Welti, Marketing and Events Manager for Brilliant Brighton, said: “Brilliant Brighton has such a diverse range of businesses; from cafes and eateries, to stores and salons, and it’s been fantastic to see so many get ‘festively fabulous’ with dressing their window for our competition and the support from local residents voting for them!

“We’ve seen illustrations, wreaths, toy dogs on sleighs and lots of lovely lights, adding to the Christmas atmosphere in the city centre. Huge congratulations to our winners Simon Webster Hair, and of course, the lucky voter drawn in our prize draw, who also won £150!”

Sophie Webster, founder and manager of Gardner St’s Simon Webster Hair, added: “It was great to take part in the competition this year. We made all the garlands ourselves with supplies bought from fellow North Laine independent businesses because we wanted to keep everything locally-sourced and sustainable.”

The 880+ voters were entered into a prize draw to win £150 too. Stephen Divers was the drawn as the lucky winner and has shared that the money will be donated to charity, ahead of two fundraising 100 mile bike rides he’s taking on later this year.

The window dressing competition was organised by Brilliant Brighton – a not-for-profit organisation formed of 517 city centre businesses who come together to put on projects, including the city centre’s Christmas lights.

To find out more about Brilliant Brighton and hear about upcoming events, CLICK HERE