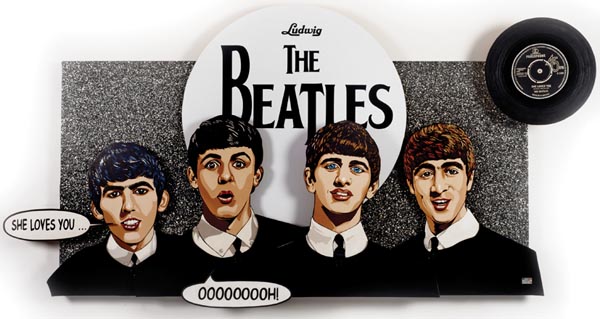 Craig Hanlon-Smith spends an evening in the company of local artist Lez Ingham to find out what inspires her to paint the stars.

The ring on my phone took me by surprise as I browsed for a gift in a painfully quiet wine-shop in Seven Dials. Stepping into the street to take the call I struggled to hear the voice on the other end, local artist Lez Ingham, calling to arrange our interview a few days later. After sharing some barely audible appreciations of Southern Rail the date was set: “Come to mine darling” she sang, “I’ll open a bottle of something fabulous. And dinner – shall I cook you dinner?” Three days later, loaded with interest and a dollop of apprehension, I climb the stairs to Lez’s Hove pad and to one of the warmest and most excitable welcomes I have ever received.

She stands, hands on hips blinking from behind large brimmed (and extremely stylish) spectacles, penetrating with a stare that may be assessing my hair, my posture, my general appearance, who knows, before breaking into a beam “Yes! you’re marvellous. I hadn’t known what to expect but you’re verrrrry interesting”.

Installing me on the sofa thrusting a red wine into my hand, and then disappearing into the kitchen to chink a few pots and stir at the bubbling saucepan, she enthusiastically yells “ask me anything!” before she is back seconds later talking ten to the dozen all about an upbringing which began in Zambia where she was born, and then took in much of the United States; “I had the most wonderful childhood” she shares. “My parents were truly wonderful people, I loved them so very much, I really did”. Lez’s family and relationship with her parents is a subject she returns to during our evening together time and again. This level of personal detail and shared intimacy is fascinatingly immediate and I find myself thinking of all the people I know who might find it strange and not at all British, but of course of all those who would immediately love Lez as I begin to think I do.

After studying in London, Lez moved to South Africa and to a successful career in advertising and graphic design; “I was looking for a gay club called ‘The Studio’ in Cape Town but landed this career in advertising”; that I cannot make head nor tale of the chronology doesn’t appear to concern Lez as she leaps around her life story of lesbian squat parties in Notting Hill and bolshy relationships with work colleagues in the southern hemisphere, before settling back in first London and now Brighton as an artist. “I love this country” she tells me much later, “not ‘Britain’! That’s another of these political constructs, but England, and all it has to offer – the opportunities!”

Glass refilled as it is many times that evening, my bottom barely brushes the cushions of the sofa before she’s back from the kitchen and we’re off for a tour of the art. “Come to the bedroom and meet David!” she hurries, which does nothing to settle my heart-rate. David, it turns out is a painting and I am not at all disappointed to find a three dimensional Pop-Art inspired painting of David Bowie looming at me from above the bed, its colours and silver gleaming base as vibrant and arresting as its creator. The Bowie piece is one feature of a series of paintings appropriately named Icons, and as she talks of each work and its inspired name-sake, I am struck at how she speaks of the completed works and their inspirations as though long-standing friends, Michael Jackson, Grace Jones, Annie Lennox, Freddie Mercury and Elvis amongst the newly arrived dinner guests. I had spotted ‘Grace’ the moment I had stepped into the flat and took great delight in what I perceived to be a potential ice-breaker.

“I’ve met her” she responds, “she’s tiny!” And yet nothing Lez shares could ever be perceived as a name drop or show off when delivered with such warmth, humour, and a continuous sense of child-like wonder, which is contagious. Dinner is interrupted for Lez to say “I have to bring out Madonna, you must see her” and the compact living room fills with another larger than life painting that I just know would delight its namesake as much as it is does me.

“Touch her” an instruction Lez repeats with all the works she shares with me. “I want you to feel the texture, the paint, put your hands on it, go on! I’m not precious about my work” and I am instantly aware of how most usual art appreciation is distant, removed and locked away from the spectator behind a velvet rope. This experience is more akin to live theatre and I am sitting on the actors’ knee. It’s unusual, unnatural, unnerving but I like it.

Such is her apparent enthusiasm for my company, I am in little doubt that should I find myself in her corner she would see to it that team Lez give me as much support and attention as their main charge. She has an alarming yet I am certain fortunate ability to make her guest feel as though we have known one another for years, and I have to remind myself several times not to simply lap up the captivating company or wolf down the delicious food she has clearly spent hours preparing, that I am there to work.

Our evening is laced with intensely personal accounts of her youth, her family, relationships and most movingly of taking care of both her dying mother and immediately following, her former long-term partner;

“I was devastated when my parents died, my mother and my father and when my relationship ended” and over dinner she shares intensely personal memories of the aftermath of such loss.

I ask Lez to describe her work and spot the only moment in our evening together when I may have said something to irritate my host. “I can’t describe my work, I don’t describe it. It’s how I feel. I can tell you how I feel about it” and then launches into an explanation of how terrified and shaken she felt post 9/11, events which inspired one of many wall covering pieces ‘Super Girl’ from her collection of Super Heroes. “What’s bothering me now, is what a fucked up world we’re living in, how terrible it all is, the waste, the greed and the corruption” and I see in the art work she walks me through, an escape from all that bothers her, colour, light, and a fantastical sense of ‘other’.

Pop Art has a clear impact upon her work, but when pressed her inspirations straddle the decades: “Warhol, Hockney, Van Gogh people who broke the mould, who were ahead of their time”. Before I have chance to ask if she’s aware that all her listed influences are male she fixes me with that excited tractor beam of a stare to tell me “in my past life I think I was a man, I know I was a man. Because in this life, I think like a man”.

And so what next for Lez Ingham? “Portraits – something I have wanted to do for a long time. Portraits of people I admire, people I love and respect, people who stand out”. And as our evening together draws to a close and I dance off into the rainy late evening, infused with her contagious energy, one statement she shares echoes around my head:

“I love painting. I just love it. It really is the only thing to do”.