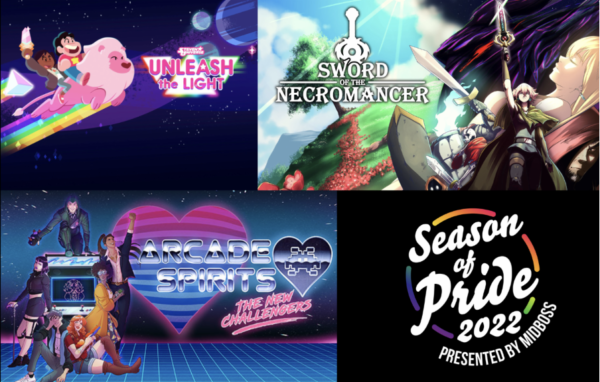 Festivities include a Nintendo eShop sale on LGBTQ+ titles, including Arcade Spirits: The New Challengers, Steven Universe: Unleash the Light, Sword of the Necromancer, and more. Additionally, a Steam sale and event features discounts on LGBTQ+-themed games and spotlights on upcoming games centred around queer themes. Other companies providing support include Annapurna Interactive, Devolver Digital, Green Man Gaming, and more.

Additionally LGBTQ+ streamers like DEERE, JeffBrutlag, and UrbanBohemian will play games featuring representation of queer characters, themes, and stories in marathons across the three weekends of the event. Funds raised from these streams will support charities The Trevor Project, Trans Lifeline, Minus 18, Mermaids UK, GaymerX, Black Girls Code, Women in Games International, and Girls Who Code.

MidBoss, developer and publisher of LGBTQ-themed titles like 2064: Read Only Memories and Kitsune Tails, organised the event, and will livestream and re-host partnered streamers on the MidBoss Twitch Channel throughout the month. Season of Pride 2022 aims to build on the success of Season of Pride 2021, which raised just under $30,000 for charity, and amassed more than 21 years of viewership of LGBTQ+ streamers and games.

Cade Peterson, CEO of MidBoss, said: “We are so grateful to host another Season of Pride to shine a spotlight on all the great LGBTQ+ games and content creators and to support the mission of some great causes. Donate early, donate often! Add some games to that backlog and feel good about it!”

For the full schedule and details about participating games and streamers, check out the Season of Pride website and take part in the month-long extravaganza via the MidBoss Twitch Channel.