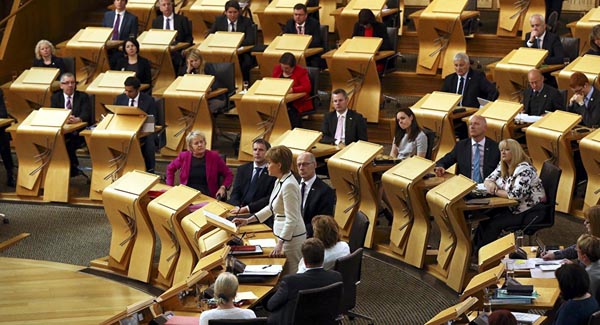 The Scottish Parliament will have the first vote today on the bill that pardons people convicted of historical discriminatory offences of sex between men.

THE Historical Sexual Offences (Pardons and Disregards) (Scotland) Bill has its stage 1 debate in the Parliament this afternoon followed by a vote on the general principles of the bill at 5pm.

Tim Hopkins, Director of the Equality Network, said: “We welcome the first Parliamentary debate and vote on this bill. The Scottish Government have done a good job drafting the bill, and have avoided the problems in the pardons legislation in the rest of the UK. Although the bill cannot undo the discrimination of the past and the harm that it has caused, it is a very important statement that Scotland regrets and rejects that discrimination, and now considers its LGBT+ people to be fully equal citizens who deserve equal respect. It will be of great practical importance for people who currently have one of these convictions show up on criminal record checks for jobs or volunteer posts.”

The bill states clearly that the convictions were wrong and discriminatory, and the First Minister made a public apology for this on behalf of the Scottish Government when the bill was published on November 7 last year.

The bill gives a formal pardon for these discriminatory convictions where the activity would not be a crime today. The pardon applies both posthumously to people who are no longer living, and to those who are living. The bill also enables people who have such a conviction on their records to have it removed (called a “disregard”), so that it no longer shows up on criminal record checks.

Prior to these changes, men were prosecuted for activity with another man that would have been legal then between a man and a woman, and that is legal today between two men. This included consensual sexual activity in private, and acts such as kissing another man in a public place.

The Equality Network estimates that the total number of these historical discriminatory convictions in Scotland runs into thousands, and that there are hundreds of men alive today with such convictions on their records.

Sex between women was never criminalised in this way in Scotland, and the same rules applied to it as applied for sex between a man and a woman.

If the Scottish Parliament votes in favour of the bill today, it will move on to stage 2, the Committee amendment stage, and then stage 3, the final debate and vote in the whole Parliament, most likely in June.