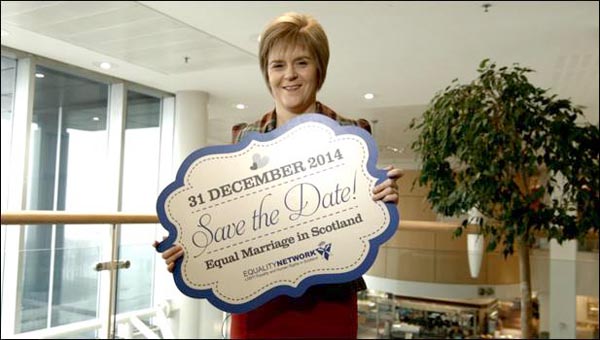 Scotland’s First Minister, Nicola Sturgeon, has recorded a special video message to mark the first same-sex weddings in Scotland, which will take place at the stroke of midnight tonight (December 30), following the passage of Scotland’s historic equal marriage legislation earlier this year.

In the video message the First Minister says: “2014 has been a momentous year for equality in Scotland. Back in February after a long process of consultation and legislation, the Scottish parliament voted overwhelmingly to legalise same-sex marriage in Scotland. That was a very special moment, it’s a moment that will live long in my memory, perhaps one of the most special days I’ve experienced in the Scottish Parliament; MSPs applauding the campaigners in the public gallery who had worked so hard to make that day a reality. It’s now fantastic to think on Hogmanay same-sex couples will have the opportunity to get married, and I look forward to attending one of those weddings myself. I give my warm congratulations to couples all over Scotland who on Hogmanay and in the days, weeks, months and years to come will celebrate their love by deciding to get married. There’s no doubt that we’ve come a long way in Scotland on the issue of equality. There have been some great examples of progress in my lifetime but we’ve still got a way to go. There are still attitudes that we need, collectively, by coming together, to challenge. But for now, I think we should all take the moment to celebrate this milestone for equality. And as we do, wish everybody across Scotland who take the decision to get married all the best for their future together.”

The Equality Network, Scotland’s national lesbian, gay, bisexual, transgender and intersex (LGBTI) equality and human rights charity, who ran the Equal Marriage campaign in Scotland, said it was “important that the First Minister had chosen to personally mark this milestone.”

Tom French, Policy and Public Affairs Coordinator for the Equality Network, added: “While our campaign for Equal Marriage in Scotland was fundamentally about changing the law it was also about changing attitudes too. That’s why this public message from the First Minister is so important, because on the day of the first same-sex weddings it sends out a strong message that Scotland – our government and our political leaders – are proud to stand up for LGBTI equality. When many young LGBTI people still face prejudice and lack confidence, and when so many countries around the world still criminalise LGBTI people, it can’t be overestimated how important it is to see this kind of visible leadership from our politicians.”

At midnight tonight (December 40), the First Minister will attend one of the first same-sex weddings, where she will be a witness at the marriage of Susan and Gerrie Douglas-Scott in Glasgow.

The Equality Network acknowledges that Nicola Sturgeon was ‘instrumental’ in delivering same-sex marriage in Scotland. It is understood that she played a significant role in ensuring the SNP made a manifesto commitment to consult on same-sex marriage at the 2011 Scottish Parliament elections, and in her role as Scottish Government Cabinet Secretary for Health and Wellbeing she was responsible for launching the consultation on introducing same-sex marriage in 2011 and for developing the policy during 2012.

Scottish Government figures reveal that 17 same-sex couples are set to marry in Scotland on Hogmanay (31 December 2014) and, in addition, over 250 couples have converted their civil partnerships to marriage since the new law came into effect on December 16 2014.

Same-sex marriages have now been registered in at least 28 of Scotland’s 32 local authority areas, from Dumfries and Galloway to the Shetland Islands.

In February, Scotland became the 17th Country in the world to legalise same-sex marriage after the Scottish Parliament passed the Marriage and Civil Partnership (Scotland) Act 2014 by an overwhelming 105 votes to 18, the third strongest majority for any same-sex marriage legislation in the world.

The Act received Royal Assent in March and, following the passage of the necessary secondary legislation, the law came into effect on 16 December 2014.

From December 16, 2014 same-sex couples have been able to give notice to marry in Scotland, and after the usual 15 day notice period for marriages the first same-sex marriage ceremonies took place at midnight on December 31, 2014.

Same-sex couples in an existing Scottish Civil Partnership have been able to convert it to a marriage since December 16, through a simple administrative process that remains free of charge for the first year of the new law (until December 15, 2015).

To mark the new law the Equality Network has published a new guide to same-sex marriage and civil partnership law in Scotland, sponsored by UK law firm BLM and with a Foreword from Scotland’s First Minister Nicola Sturgeon.

A digital version of the guide has been published online and 10,000 copies of a printed edition will be distributed across Scotland in January: