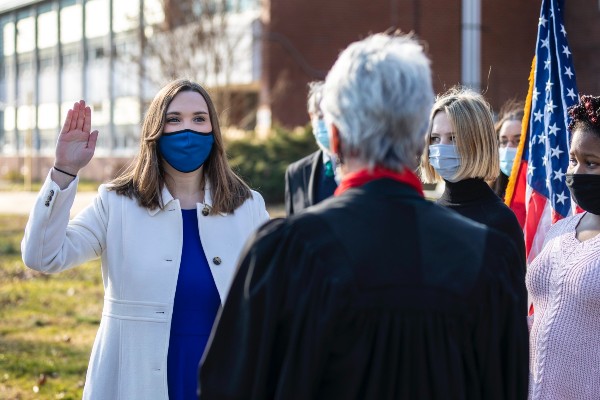 30-year-old Sarah McBride has been sworn in as the senator of Delaware after winning the November 2020 elections, making her the highest ranking transgender official in US history. According to USA Today, McBride aims to reform health care laws, and help to alleviate the impacts of the Covid-19 crisis: “What we’ve seen is that far too many Delawareans had to give up their income in the face of illness. … Whether that’s COVID or cancer, whether that’s an individual health crisis or a public health crisis, the same values and the same principles are at stake.”

When speaking about her new role as senator, McBride said: “I recognize that folks have a diversity of thought in this state and there will be people who disagree with positions I take or policies I put forward. I’m no stranger to advocacy and I’m ready to do the work necessary to get those bills over the finish line and to do so in a way that results in meaningful change for the folks who elected me.”

She continued: “At the end of the day, diversity in government isn’t just about symbolism and messages. Because the Delaware Legislature more fully looks like Delaware … the bills we pass will more fully address the wide range of needs and experiences that Delawareans of all backgrounds are facing right now.”

Mayor Annise Parker, president & CEO of LGBTQ Victory Fund, praised McBride, saying: “Sarah’s overwhelming victory is a powerful testament to the growing influence of transgender leaders in our politics and gives hope to countless trans people looking toward a brighter future. Her victory will inspire more trans people to follow in her footsteps and run for public office.”