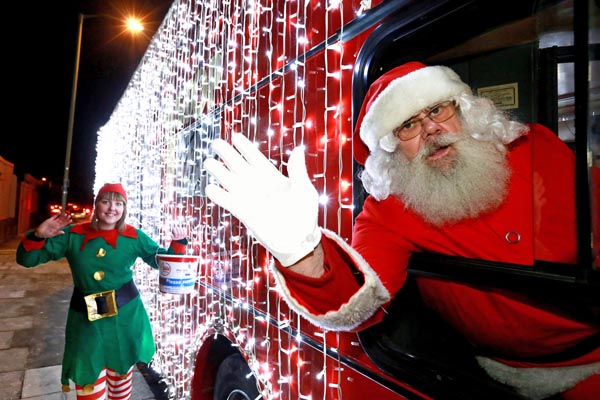 LAUNCHED by Brighton & Hove Buses, The Argus Appeal and Martlets Hospice, the Santa Bus will visit more than 200 streets across 20 nights, collecting money for the two charities.

Brighton & Hove Buses’ Managing Director Martin Harris said: “We’re so pleased to once again be lending Santa one of our buses, along with a willing crew of drivers, as he visits local communities. We’ll also be mobilising elves and reindeer from our bus depots for Santa’s first trip on Thursday to give him a hand.

“The Santa Bus is in its 15th momentous year and it has already raised almost a quarter of a million pounds for Marlets Hospice and The Argus Appeal. Every year, I’m blown away by the generosity of the people who live in this city. Wouldn’t it be amazing if we exceeded our target this Christmas and helped out these organisations that do so much for people in Brighton & Hove?”

The bus is covered with 9,600 fairy lights – cabled up and fixed by a team of engineers at the Brighton & Hove Buses’ Conway Street depot – and plays Christmas songs as it goes. Volunteer bucket collectors will knock on doors and collect donations as the bus makes it way through the streets.

Brighton & Hove Buses’ staff will be dressed as elves, reindeer, Christmas trees and snowmen for the first night of the Santa Bus. Other companies also volunteer and collect on other nights, including Legal and General, Lloyds, and Brighton & Hove City Council.

Arron Hendy, Editor of The Argus, said: “The Santa Bus is the city’s biggest Christmas project and we are so proud that hundreds of thousands of pounds has been raised in the past 15 years for these two wonderful charities. A big thank you to Brighton and Hove Buses and to all the volunteers whose efforts make this such a success year after year.”

This year, there have been changes to some of Santa’s routes and the days he visits so that he can visit as many children as possible. Father Christmas will not be able to get off the bus and meet everyone for this reason, but rest assured he knows where you live, in time for Christmas Eve.

The Santa Tracker will have live updates of Santa’s location using the interactive map on B&H Buses’ home page.

The Santa Bus makes its first tour on Thursday, November 22, between about 5.30pm and 8.30pm, and runs daily until December 19.