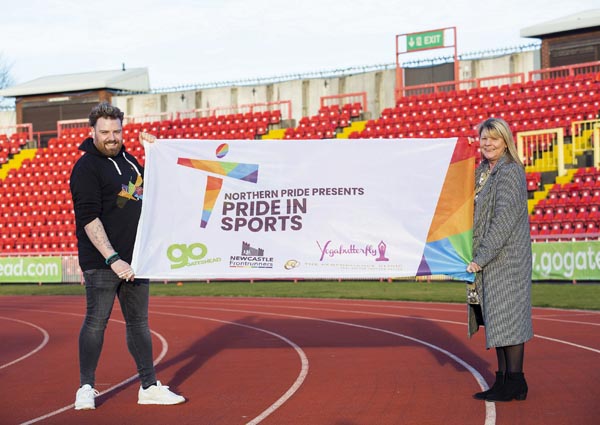 Supporters are on the run to help keep one of the UK’s largest LGBT+ festivals free.

WHILE many Prides around the country now charge an entry fee, Northern Pride Festival is funded entirely on sponsorships and donations.

Four members from the local LGBT+ communities have signed up to take part in the SimplyHealth Great North Run on behalf of the charity, to help keep the festival free for those who otherwise may not be able to afford to attend.

The team will be led by chair of Northern Pride, Ste Dunn, and supported with a 12-month membership to Newcastle Frontrunners – a running club for LGBT+ people and their friends.

They will also receive free yoga and meditation sessions from Gateshead’s Yogabutterfly, access to the state-of-the-art gym facilities at GO Gateshead and injury prevention support from the Performance Clinic, which has studios at Gateshead and Sunderland.

After being bullied at school and university for being LGBT+, Fee Chilvers recognises the importance of keeping pride events accessible for everyone and also hopes that having the support of the team will allow them to improve both their mental and physical health.

“I feel that it’s incredibly important that I do my part in ensuring my local pride can remain free for years to come and allow all LGBT+ people to attend,” said Fee, who is one of the runners.

Also running for the charity is DJ Michael Maddison, who hopes to encourage others by sharing his experience.

Michael said: “Working in the gay scene in Newcastle and across the UK, I hope that by sharing my half marathon journey on social media, others will see that anyone can do it.”

And Stephen Sullivan, who runs his own bar and travels the UK as an actor, hopes the challenge will allow him to fit an exercise routine into his busy life.

While he is looking to improve both his mental and physical health through the training, he also wants to support Northern Pride to keep their year-long work funded.

Completing the team is Lara Allan-Grant, a special needs teacher who suffered a back injury seven-years ago and is looking to get back into fitness to show her pupils that they can be themselves regardless of their gender or sexuality.

Ste Dunn, chair of Northern Pride, is looking forward to training with the team.

He said: “Keeping Northern Pride Festival free so that no one is priced out of attending is something the committee cares very strongly about.

“Because we are a volunteer-led charity, we rely entirely on donations to keep the festival running and that is why fundraising efforts like this are so important.

“We are very grateful to all of our runners and to the organisations who are supporting Northern Pride’s SimplyHealth Great North Run Challenge and it will be a real team effort to make sure everyone gets half marathon ready.”

Councillor Angela Douglas, Cabinet Member for Culture, Sport and Leisure at Gateshead Council believes the challenge is a fantastic idea.

She said: “The Northern Pride Festival is a brilliant family event which attracts thousands of visitors to the city every year.

“One of the things that makes the festival stand out against others of its kind is that it is free to attend, meaning as many people as possible can enjoy the event.

“The runners are raising money for a very deserving cause and have the bonus of getting to take part in our famous half marathon at the same time.”

Northern Pride organises a number of events and campaigns throughout the year, including the Northern Pride Festival which takes place from 19 to 21 July at the Town Moor and Exhibition Park – with a star-studded musical line-up still to be announced.

To donate to the team, text PRIDERUN to 70085 to donate £3 or visit Northern Pride’s website.