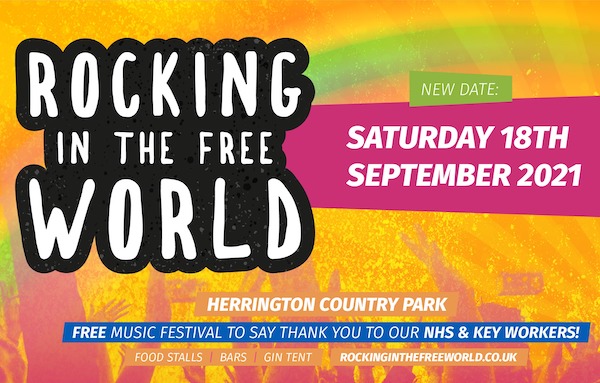 A stellar line up of music stars will be celebrating key workers at a special festival in Sunderland later this month – and there’s still time to get tickets.

Rocking in the Free World takes place at Herrington Park on September 18 to 19, organised to thank frontline staff for their hard work during the pandemic.

Originally planned as a one day event, the festival recently expanded to a full weekend of entertainment, with Sunday’s One Love line up featuring huge names like celebrated DJs Gok Wan, Danny Rampling and alternative rock band Republica whose hit song Ready to Go has become an unofficial anthem for Sunderland FC.

Also taking to the Esh Construction Monument Stage are disco favourites Horse Meat Disco, who have performed at many of the world’s top festivals, Danny Rampling – often credited as one of the founders of the UK club scene – 20-piece orchestra Ibiza in Symphony, and singer-songwriter Chintzy Stetson.

Music fans can also enjoy acts on the Beacon Stage, including Wayne C McDonald & Keith Martin, Sam Dickinson, Say What and Rusty, with a huge food and drink village, comedy and stalls elsewhere on the site.

One Love has teamed up with Pride Radio and aims to celebrate Pride around the UK, along with supporting akt – a charity helping young LGBTQ+ people who are homeless or struggling with their housing situation.

And those heading to the festival on Saturday can enjoy performances from award-winning headliner Emeli Sandé, Karen Harding, Sons of Eden and Christian Yu along with a string of top DJs including Fat Tony, Carly Wilford and Richard Tulip.

Tickets for One Love cost £10 each and are available HERE, while the Saturday remains a free event.