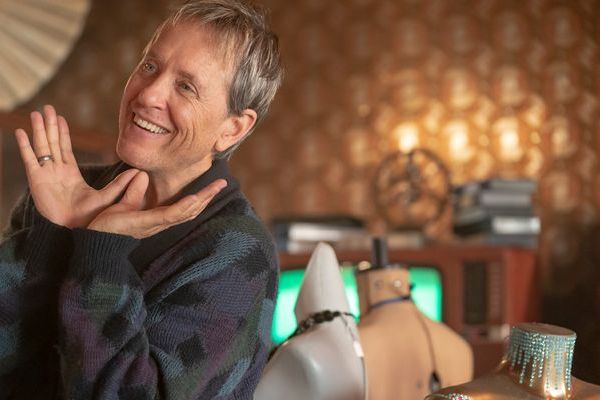 In a recent interview, Richard E Grant reflected on his upcoming role in Everybody’s Talking About Jamie, admitting ‘Playing a drag queen gave me sleepless nights’. The interview was conducted with Brighton based company Travel Gay, just before his wife tragically passed away.

The film adaption of Everybody’s Talking About Jamie is a hotly awaited release. Richard E Grant has triumphed in many roles over the years – from Withnail to Michael Heseltine. He’s played gay characters before, but this will be the first time he’s played a drag queen, his first attempt at a Sheffield accent and his first attempt at singing. He’s 64 and clearly willing to embrace new challenges.

He reflected on his role as Loco Chanelle: “He goes from being this downtrodden old has-been running a drag shop in a rundown part of Sheffield to being reignited as his former drag persona of Loco Chanelle, having been a success in Soho in the 80s. Then Jamie, a sixteen-year-old boy, comes into his shop and says he wants to become a drag queen. It’s a great transformation.”

In the past, Richard E Grant said gay actors should play gay roles. He made an exception for Everybody’s Talking About Jamie: “That conversation related to when Darren Criss won for playing Versace’s assassin. He said that he would never play a gay character again. At the time, I was on the award circuit for Can You Ever Forgive Me? Melissa McCarthy and I were both playing gay characters. The conversation then was how can you justify it? When I met Jonathan Butterell, the director of Jamie, I asked why he wasn’t casting a gay actor or drag queen. He said ‘you have sad eyes’. He pointed out that the whole creative team was gay and we’ve decided you’re the best person to play this part.”

“I told him he’d have to argue and justify casting me. He said it was for him to make that decision and asked if I’d do it. So that’s what I did. You don’t want to be insensitive or seem like you’re taking an opportunity away from someone else. I was in terror of doing it as it’s so out of my comfort zone. I’d never done drag or a Sheffield accent. That made it frightening but also exhilarating.”

According to script writer Dan Gillespie Sells, Jamie represents a new kind of hero: “The story itself is classic. It’s someone who is overcoming the odds to find themselves, to reach some difficult goal. We don’t tell many stories about effeminate men or boys. We don’t tell stories about them as the hero.”

The film is likely to be a big success. The original musical helped to put gay characters firmly centre stage in the West End. Prior to Jamie, the West End featured many actors we can safely assume were gay, but had little option but to play straight roles. Jamie is part of the LGBT+ drama revolution that began with Queer As Folk, but only really came to fruition in recent years.

Everybody’s Talking About Jamie is released on September 17th on Amazon Prime Video.